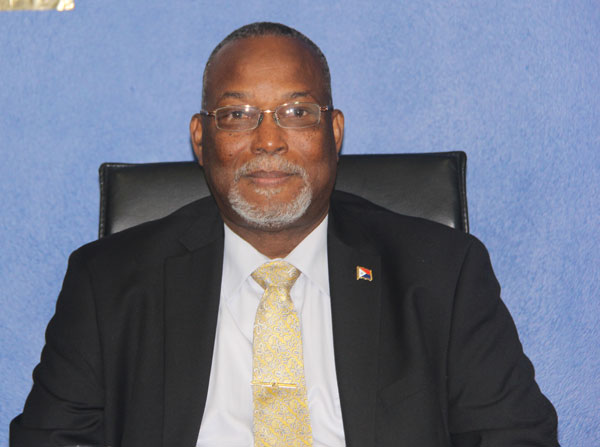 PHILIPSBURG:— Minister of Justice Rafaeal Boasman announced on Wednesday that the work within the Justice Ministry is far from being completed but surely the country is making progress.
Minister Boasman said his statements are based on the draft report that was issued by the Progress committee.
He said the committee specifically pointed out the progress made at the Pointe Blanche prison since Police Inspector Steven Carty and Wilfred Williams took over the management of the prison. Minister Boasman said it gives a good feeling when committees could recognize local civil servants that are able to accomplish especially when the thought is out there claiming that St. Maarten does not have people (workers) that can do the job. He said while a lot of positive things were mentioned in the report there are also negatives one being the lack of the “Function Book” and automation of the prison system.
The Minister said he is working on getting the Function Book of KPSM in order but the committee is not too pleased with his suggestion which is to put in place what KPSM currently has with amendments to come at a later time. As for the automation of the prison system the Minister said former Minister of Justice Dennis Richardson had paid for a system and his intention is to ensure that system is activated because it worked well in the past.

Immigration Controls will continue “ I will identify delinquent businesses”
The Minister of Justice also made clear that the immigration controls will continue and his intention is to also identify delinquent businesses that have been hiring undocumented workers and rob them of their rights. The Minister said while he intends to hold these businesses accountable his intention is to also let the people know which businesses are found to have undocumented workers. He said earlier this week immigration conducted raids in the Maho area and “Sky Beach” had 6 undocumented workers. Boasman said this is a total shame because the employers did not even try to regulate their workers status. He has said it’s unfair for politicians and other workers that are legal to pay taxes while these businesses have been abusing the system and the people that work for them.
“It is a total shame that employers would hire people and deny them healthcare while withholding taxes from government. My intention is to let the people know who these businesses are because they all have to contribute towards the growth of the country.”
AFPAF team on hold until parliament fully informed.
Asked about the status of the AFPAK team and he has abundant the team, Boasman said that the team has been placed on hold until parliament gets all the answers they want. The Minister made clear that Parliament does not have to approve of the team because that team was established based on existing laws, however, as a Minister that has to answer to parliament he respects parliament because the parliament represents the people. The Minister of Justice said what when he is finished with providing parliament with the answers they need he will then decide whether or not to continue with the team and how they will go about their work.