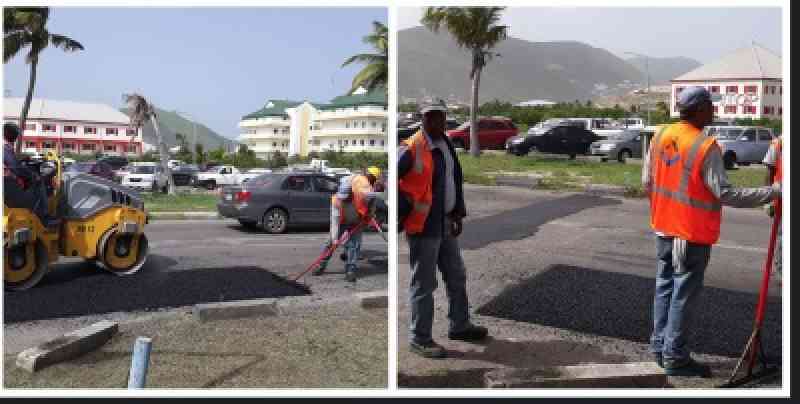 PHILIPSBURG:— VROMI Minister Miklos Giterson was updated on the progress of the ongoing road paving/patching project by his Department of Infrastructure Management on Friday, September 21st.

The project, which started the first week of September, is focused on the repaving and re-patching of a number of roads in the different districts, beginning with the main roads and then moving on to the secondary roads. The Ministry has purchased 2000 metric tons of asphalt to carry out the works. Thus far the Sucker Garden and Pondfill roads have been worked on and crews are currently on the L.B. Scott Road.

Minister Giterson thanks the general public for their continued patience for any minor traffic interruptions caused during this time. The Minister also requests all drivers to exercise caution and increased vigilance for the safety of themselves and the road workers as they drive past these sites.

December 3, 2020
0
POINTE BLANCHE:— Christmas is coming to Philipsburg and especially at the Walter Plantz Square (WPS) at Down Street on Saturday afternoon, December 5th. Come...

December 3, 2020
0
PHILIPSBURG:— As of December 3rd, there were thirteen (13) persons who tested positive for COVID-19; however there was a recovery rate of seventeen (17) persons; bringing the total active cases to eighty- seven (87). The total number of confirmed...
Read more

December 3, 2020
0
PHILIPSBURG:— The Police of Sint Maarten (KPSM) has been continuously working towards putting a halt to the increase in car thefts taking place on...

December 3, 2020
0
PHILIPSBURG:— The Police of Sint Maarten (KPSM) has been continuously working towards putting a halt to the increase in car thefts taking place on...