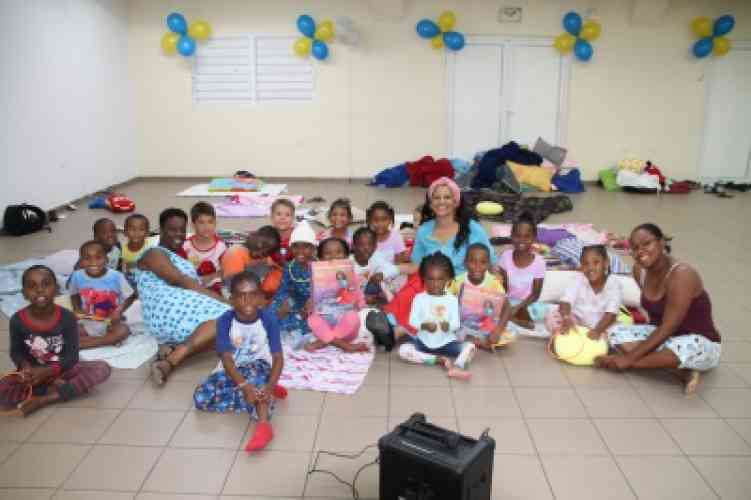 PHILIPSBURG:— Rotary International is dedicated to six core values of which the Rotary Club of St. Martin Sunset upholds. Throughout the month of September, we honored Basic Education and Literacy. One of the events the club hosted was the first annual Reading Slumber Fun pajama party. The Reading Slumber Fun was a pajama reading party catered to children between the ages of 6 and 12 and was hosted on Friday, September 28th, 2018 at the John Larmonie Center. The event consisted of storytelling with Ms. Loekie Morales, Ms. Clara Reyes, and Mrs. Rita Carty, arts and crafts presented by the club members, and ended with a movie night and refreshments. The children were divided into 3 groups, categorized by age. President Jaida Nisbett and Service Club Director Kimberley Duzong greeted the entire group with their opening remarks and rules of the night. The children were then entertained by the likes of stuffed characters such as Barney, Winnie the Pooh, Minion, and Batman. The first two groups were separated to partake in story time, while the last group indulged in arts and crafts, whereby they were able to create bookmarkers for their reading books. Thereafter, the group came together once again for the movie and refreshments. The club made a decision to screen a movie that was unfamiliar to many of the children at the event. “Matilda” was shown and the room was filled with laughter and amusement. Registration began at 7:00 pm until 7:30 pm, whereby more than 80 children were in attendance, and the events began from 7:30 pm and ended at 10:15 pm. Prizes were given to children who were able to answer questions about the movie and the Rotary Club of St. Martin Sunset. The prizes received were sponsored by Domino’s Pizza.
The Rotary Club of St. Martin Sunset would like to thank the parents, children, members of the club, story readers; Ms. Reyes, Ms. Morales, and Mrs. Carty, cartoon characters sponsored by the Original Party Entertainers, Captain’s Rib Shack, Domino’s Pizza, Shop 4 Less, Rotarian Julie Ramchandani-Harpalani, Carl N Sons Bakery and FunShaq.