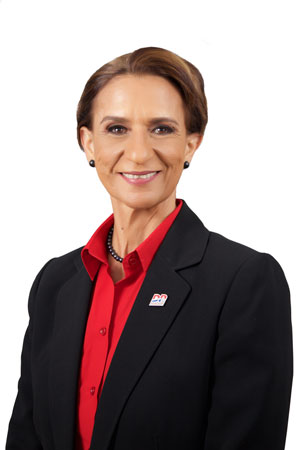 PHILIPSBURG:— In a rare move, Member of Parliament, Chairlady Sarah Wescot-Williams, directed a personal and passionate letter to the Kingdom government, asking Prime Minister Rutte to consider separating the much-anticipated reconstruction aid from the Netherlands from the conditions imposed by the Kingdom government.

These conditions have been spelled out in a letter from the Minister of Kingdom Relations, R. Plasterk on October 13th. It is just recently that the Chairlady asked the local government if aware of these conditions and to spell them out.
Minister Plasterk has now made clear that the Integrity Chamber and border control are firm conditions attached to Dutch hurricane aid. “My concern is that a standoff on these 2 issues jeopardizes the aid that should come to St. Maarten. Furthermore, other potential donor agencies and countries could look to the Netherlands for leadership, meaning they too could take on a wait-and-see attitude.”

In her letter, the Chairlady of Parliament points out again, the magnitude of the storm, the immediate assistance given, and our people’s own willingness to rebound and come back stronger.She expressed her grave concern for what the coming weeks will bring if not addressed head-on and with conviction.
On a separate note, MP Wescot looks at the issues of integrity and border control (immigration).“Not matters we should turn way from, but surely neither, to make the aid to St. Maarten dependent on.”

The MP’s 3-page letter makes her request and proposal to the Kingdom government clear and to the point. Make the funds available as soon as possible and put the most stringent control mechanism in place. She concludes with the assurance that integrity and immigration will not be swept under the rug, but should reach the highest echelon in our political system, namely the parliament of St. Maarten.
This body should debate in all openness these 2 topics and the effects on the relationship between St. Maarten and the Netherlands/the Kingdom.“And finally, like I have stated in the past, this is a good time to review our immigration policies and laws.”

For the full text of the MP’s letter, visit her facebook page at www.facebook.com/Sarah-Wescot-Williams-Member-of-Parliament

Click here to view Chairlady of Parliament Sarah Wescot-Williams letter to the Netherlands.