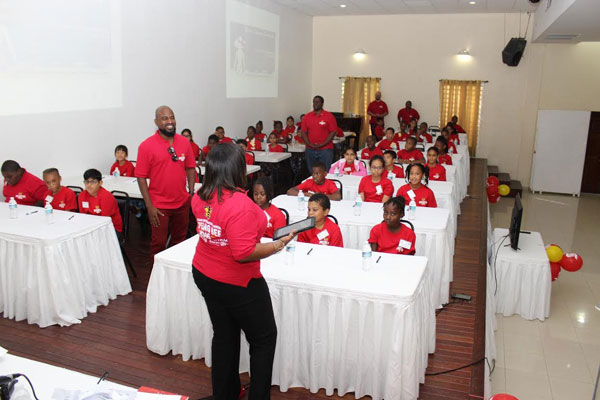 PHILIPSBURG:—- All the schools that participated in ‘The Scotiabank Rotary-Rotaract Spelling Bee’ 2016 organized by ‘the Rotary Club of St. Maarten-mid Isle’ were asked to present a wish list of items that their schools were in need of. The teachers were invited by Mid Isle to join them for a fellowship evening so that these items could be presented. Unfortunately, some of the items were not available on time so these will be presented directly to the school in due course. The Anguilla schools were unable to attend and arrangements will be made to deliver their items at a later date.

The Scotiabank Rotary/Rotaract Spelling Bee 2016 was the 6th one held and was the biggest since its inception in 2011. Seventeen schools competed, fifteen from St. Maarten and two from Anguilla with a total of 38 children.

Preparations for The Scotiabank Rotary/Rotaract Spelling Bee 2017 are already in full swing. This will also be the second year that Mid Isle will hold tutorials for the students prior to the Spelling Bee.

Mid Isle will be holding their Fundraising Motor Treasure Hunt on Sunday,March 19th starting at the Kim Sha Beach in Celebration of the Rotary Foundation turning 100 years old. That’s a century of Rotary members changing lives and improving communities all over the world. See any members of Mid Isle for more information or call 520-1052 or 520-1899. The proceeds from this event will go towards a fetal monitor for the maternity wing at the SMMC and other needed items.