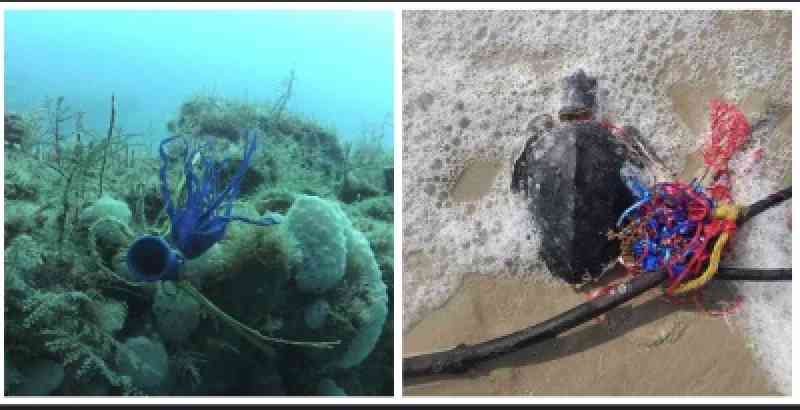 PHILIPSBURG:—The Sint Maarten Nature Foundation is urging the SCDF to find sustainable alternatives to using balloons during two events for next year’s celebration of fifty years of carnival. The Nature Foundation has sent a letter to the SCDF on Monday, October 1st asking the organization to consider sustainable alternatives, also during events at the Carnival Village, to single-use plastics.

During last year’s carnival, the Foundation recorded a significant increase in plastic litter and debris. “We are urging the SCDF to not only make the celebration for 50 years of carnival fun and exciting, but also sustainable and with minimal impact to our environment,” commented Nature Foundation Manager Tadzio Bervoets. The Foundation is especially concerned about the use of balloons and other single-use plastics during the carnival season; “Balloons may look nice, but they have a number of environmental concerns associated with them. What goes up must come down. Balloons are hazards when they enter the environment. All released balloons, whether they are released intentionally or not, return to Earth as ugly litter – including those marketed as “biodegradable latex”. Balloons kill countless animals and are especially harmful to endangered sea turtle and bird species. Balloons return to the land and sea where they can be mistaken for food and eaten by animals. Sea turtles, dolphins, whales, fish and birds have been reported with balloons in their stomachs and ribbons and strings leading to entanglement and death.
There are two types of balloons in general use – latex and Mylar. Although latex balloons are considered bio-degradable, this will take anywhere from 6 months to 4 years to decompose and they can wreak a lot of havoc before they do. In one experiment researchers observed that balloons floating in seawater deteriorated much slower, and even after 12 months, still retained their elasticity. “During beach cleanups, balloons are found often entangling wildlife, we, therefore, urge the SCDF to consider alternatives to an outdated practice,” continued Bervoets.
Instead of balloons, the Nature Foundation proposes alternates that can be used during the scheduled Golden Balloon Around Town Jump Up on the 5th of April and the Survivors Children Balloon Jump Up on the 7th of April. Alternatives to balloons include flags, banners, streamers, dancing inflatables, kites, garden spinners, and tissue paper pompoms.

“Many people, including the staff at the Nature Foundation, look forward to celebrating fifty years of carnival. But that celebration should not come at a cost to our natural environment and the various animals which will be killed by balloons and other single-use plastics. Therefore we are urging the SCDF to do the right thing and look for alternatives,” concluded Bervoets.