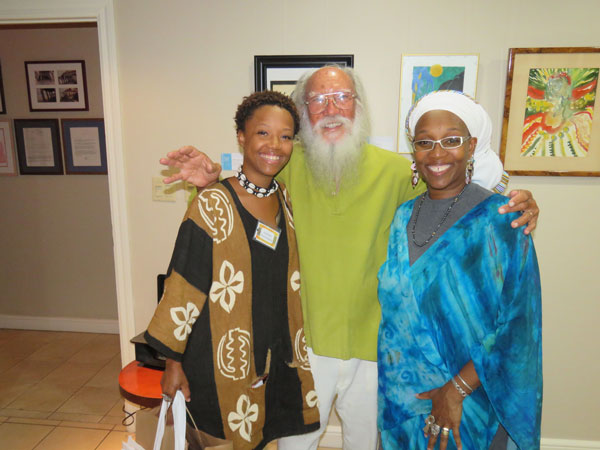 GREAT BAY:—The leading St. Martin painter Sir Roland Richardson is the new recipient of the Presidents Award from the St. Martin Book Fair.
Richardson accepted the award at the closing ceremony of the festival’s 15th anniversary on June 3, 2017, and said that he was even more touched to be honored by a St. Martin organization.
Richardson was awarded the ebony statute for his 30 plus years of “uplifting the people and cultural life of the island nation of St. Martin,” said Jacqueline A. Sample, president of House of Nehesi Publishers (HNP).
Shujah Reiph, president of Conscious Lyrics Foundation (CLF), and Sample presented the award to the artist at the American University of the Caribbean (AUC). The audience included Sir Roland’s family and authors and artists from different parts of the world. The lecture hall venue was sponsored by AUC, said Reiph, who is also the book fair co-founder and coordinator.
“Roland Richardson’s artwork is iconic for its sheer beauty and perhaps its unmatched volume for a St. Martin artist. And also for archiving rapidly changing landscapes and capturing as patrimony the dignity and varied elegance of the St. Martin people,” said Lasana M. Sekou, author, and co-founder of the St. Martin Book Fair.
“Roland’s environmental activism of the mid-1980s to early 1990s, coupled with his brief writings on St. Martin history and culture in Discover as the magazine’s editor, also had much to do with why he was selected for the Presidents Award in a year with ‘Art’ as the book fair theme,” said Sekou.
Previous recipients of what the Daily Herald has called a “prestigious award,” include George Lamming (Barbados), Casa de las Americas (Cuba), Benny Wenda (West Papua), Bankie Banx (Anguilla), Derek Walcott (St. Lucia), and Dr. Quince Duncan (Costa Rica).
“In the broad sense, the Presidents Award is presented to persons and institutions, in some instances pioneers, whose work is noted for its excellence and for combining literary, cultural, and liberation components in the service of progress, of their people or nation, and of humanity,” said Sekou.
CLF and HNP organized the 15th annual St. Martin Book Fair in collaboration with St. Maarten Tourist Bureau, University of St. Martin (USM) and L.C. Fleming Foundation. The Presidents Award is named after the presidents of CLF, HNP, and USM.