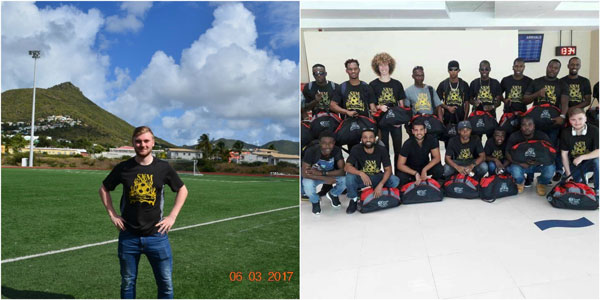 PHILIPSBURG:— Camiel Buursma is a 21-year-old Dutch student at the Hogeschool Van Amsterdam, in the Netherlands. In 2015, he worked for 10 weeks as an intern at the Sint Maarten Soccer Educational Foundation and played for Flames United FC. Other than coordinating the Interscholastic Tournament, Camiel also developed a research project for the development of football and youth football in particular. “The biggest challenge during my project, was that football was very fragmented on the Island. So, I interviewed the different football stakeholders and tried to get them on a common line. Now that I am back, I see lots of improvement and I see football is being taken seriously”. Camiel, who won the championship with Flames in 2015, has been flown back by the team on the 1st of March. This time, he has been invited to play in the CFU club championship, as Flames are making their first appearance in this competition. “Two years ago, the club told me that if they would get to participate in this tournament, they would try to get me back here. I am really thankful for the opportunity they gave me and I’m looking forward to go to Saint Vincent to play the CFU club championship with Flames”.