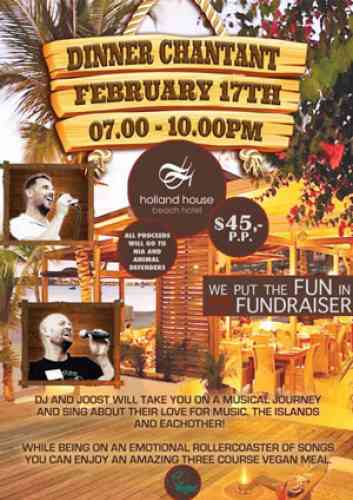 PHILIPSBURG:— It seemed like not only a delicious 3-course meal was on the menu, but also laughter and music were served last Saturday at the Holland House.

DJ Jansen and Joost de Jong were hosting an evening called “Diner Chantant” together with the fabulous staff from the Holland House. The two Dutch musical entertainers flew in a few weeks ago to help the people of St. Maarten in the aftermath of hurricane Irma.

They started at the beginning of February teaching free musical theatre classes at NIA (National Institute of Arts) and cooking free plant-based lunches and sharing them out on the streets to the people in need.

The couple raised funds in Holland to be able to buy the groceries and to allow the children to join the musical theatre classes for free. However, when talking to Paul Boetekees, the idea came up to have a fundraiser for NIA and Animal Defenders Sint Maarten at Holland House, so both the foundations could benefit more from the gentlemens’ presence on the island.

Since Joost and DJ have been singing and dancing in Holland for years they took the opportunity and made the fundraiser not only an evening of appetizing food, but also of singing and putting the fun in the FUNdraiser.

While eating a mouthwatering vegan crab cake, songs like “I’m yours” from Jason Mraz, “Shape of you” from Ed Sheeran and “Everything” from Michael Bublé made the guests sway on their chairs and eventually they all sang along. The most beautiful moment was when the first notes from “All of me” (known by John Legend) seeped from the soundsystem., one of the guests ran up to DJ and asked if he could sing the song. DJ allowed him to, and knowing that the song contained pretty high notes, all guests where holding their breath. But when the most difficult part of the song reverbed in the restaurant, a big round of applause filled the room. It turned out that this young man was Kristopher Mercuur, who is taking the Art Heals musical theatre workshop at NIA.

At this point another student could not control her enthusiasm and beckoned Joost to hand over
his microphone, Stacy-Ann passionately joined Kristopher, magic was happening on the spot.

The gentlemen took a moment to explain why they were raising funds for the two foundations. The astounding singing of Kristopher and Stacy-Ann proved that Art really does Heal and the directors of NIA, Arlene Halley and Clara Reyes received a warm applause from the guests for their countless efforts in using the arts as a form of relief for the St. Maarten people. Present were also Mercedes de Windt and Mohana Ceasar with part of their team of volunteers. The gentlemen took the opportunity to address and praise them for their ongoing work benefiting the animals on St. Maarten.

The icing of the cake was when the Minister of Education, Culture, Youth and Sport, the Honorable Jorien Wuite, who was present at the venue, surprised the fundraising party by addressing the guests and taking her precious time to contribute inspiring words towards the effort of the two organizations.

The last set of disco music got the crowd dancing at the Holland House. With the help of Chef René, who served a delicious vegan 3-course meal, (because how can you raise funds for the Animal Defenders, while eating them at the same time) the evening turned out to be a great succes, everyone left with full bellies and a joyous feeling.