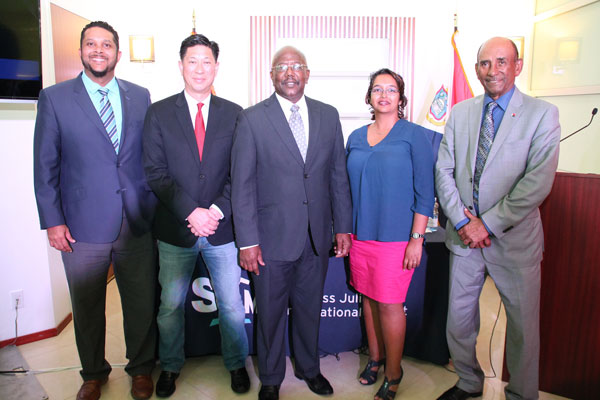 Airport: — Minister of Health Emil Lee returned to St. Maarten on Tuesday with the marketing director of Health City Cayman Islands Shomari Scot after USZV and Health City has reached a short-term agreement to treat a backlog of patients.
At the Princess Juliana International Airport (PJIEA) Prime Minister William Marlin and Minister of Finance Richard Gibson Sr also welcomed the Minister of Health and Scott to St. Maarten. Prime Minister Marlin said in his short opening remarks that the agreement with Heath City and SZV was discussed in debt with the Council of Ministers. Marlin also stated that he hopes that the people of Cayman Islands will also use this opportunity to visit St. Maarten and not only the people of St. Maarten will be visiting the Cayman Islands for medical treatment.
Parveen Boertje the Chief Customer Officer of USZV said that the short-term agreement reached with the Cayman Islands is to treat a backlog of patients with urology, neurology, and neurosurgery patients will travel to the Cayman Islands for treatment. Boertje said that the agreement is for an 8-week period which they will monitor very closely in order to provide an advice to the Minister of Health Emil Lee in order for him to take a decision for a prolonged agreement.
Shomari Scott the marketing manager of Health City said they are pleased with the agreement reached with USZV and hopes that USZV will also opt to use the other medical services they offer and not only the ones they chose to use now to deal with the backlog. Scott said they managed to make a deal on a full package which will cover airfare, meals and medical services. He said that Health City treated patients from 60 countries in 2016 and they are looking forward to a continuous working relationship with SZV and the government of St. Maarten.
Minister of Health Emil Lee tried to set the tone by stating in his remarks that he traveled to the Cayman Islands to see the type of services the patients from St. Maarten will receive and Health City facilities, he made clear he is not meddling in the affairs of USZV but wanted to see for himself what is offered to St. Maarten patients.
Minister Lee further stated that one of the hiccups St. Maarten had in in its initial discussions was the fact that most of SZV patients were not in possession of a US visa to travel through Miami to the Cayman Islands and for this reason, Health City chose to use a chartered flight for patients traveling to Health City for medical treatment.
He also announced that St. Maarten intends to work closely with Health City in order to get some guidance and assistance from them when St. Maarten is able to construct its new hospital.
Minister Lee said that the new hospital would aim for JCI accreditation and that Health City already has that accreditation which they obtained in less than one year after opening.