PHILIPSBURG:— Politicians, friends and families bid farewell to long time politician Roy Marlin at the Catholic Church in South Reward on Saturday. Roy Marlin who joined the political arena in 1995 was described as a man who loved his family and politics very much. He was also described as someone that was willing to learn even though he was known to be very stubborn. Referred to by many as “Uncle Roy” or Roy he was described as one who was always ready to assist anyone. Someone who was harsh yet had a soft heart when it comes to people.
Marlin was considered a friend and advisor to many persons especially young civil servants. Interim Prime Minister Leona Marlin Romeo broke down when she began speaking about the advices the late Roy Marlin gave her while she was a civil servant.
Former Prime Minister Marcel Gumbs spoke about Roy’s eagerness to learn politics when he joined the Democratic Party in 1995. Gumbs said he was one of those persons that taught Roy a lot about politics and some of the personal moments he spent with the late Roy Marlin in the 90’s. He described the late Roy Marlin as very intelligent and someone who knew how to broker an agreement after fierce discussions, Gumbs also believed that Roy was one of the best Member’s Members of Parliament St. Maarten had since the country obtained its status in 2010.
Former Lt. Governor of St. Maarten Franklin Richards another close friend of the deceased also spoke of Roy’s knowledge even though he was not a scholar. He said Roy was set in his ways and while his priority was his family he also loved politics and did everything he could for his island.
Leader of the UPP Theodore Heyliger also paid tribute to Roy as they both joined the Democratic Party in 1995 and would move around together as they strengthen their knowledge in politics.
President of the Democratic Party board Marinka Gumbs also broke down as she paid tribute, Gumbs said personally advised her a young girl and even assisted her in securing a proper job when she returned to St. Maarten.
Leader of the Democratic Party Sarah Wescot Williams extended her gratitude to the late Marlin family for sharing him over the years while he was in active politics. 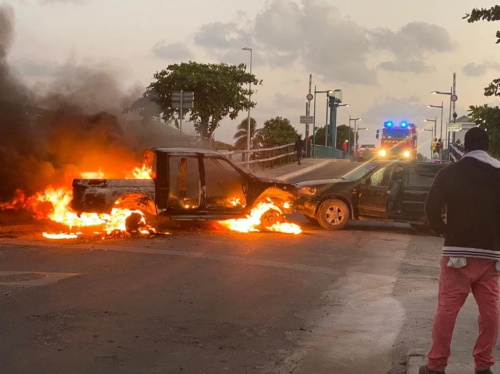 October 22, 2021
0
MARIGOT:--- Several areas on Saint Martin are blocked by protestors that are against the implementation of the Sanitary passes for restaurants and bars that have been implemented today Friday, October 22nd, 2021.Early Friday morning protestors blocked the Sandy Ground...
Read more

October 22, 2021
0
MARIGOT:--- Several areas on Saint Martin are blocked by protestors that are against the implementation of the Sanitary passes for restaurants and bars that...

United States, France, and the Kingdom of the Netherlands host Trilateral...

The Council of Ministers extends condolences to family and supporters of...