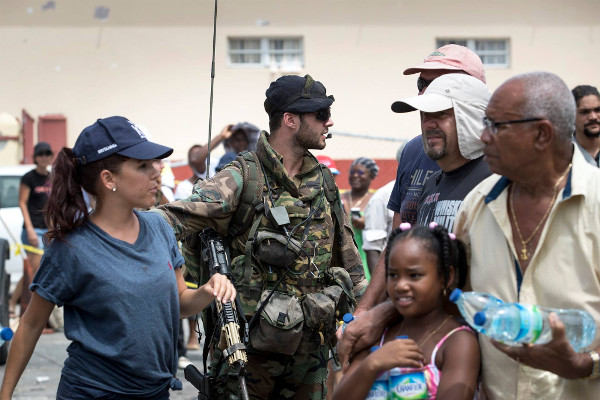 PHILIPSBURG:— The normal life on St. Maarten is slowly starting again. The local authorities support this image. Distribution of fuel and the slow completion of electricity and the GSM network contribute to this.
The military support of the emergency aid operation on Sint Maarten is expanded today with a battalion of the Corps Mariniers and a company of the air mobile brigade. Today, this command post is operational.
The security situation is getting more stable. The military presence has a positive impact and there are fewer incidents. In the next 24 hours, additional detention capacity will be realized for robbers. Demand for food is rising. Today rations are distributed in large quantities. In addition, 12 stores are provided to be used as an issue point. The 12 shops are spread throughout the various districts in Sint Maarten. The forwarding of auxiliaries and food for Sint Maarten has the highest priority for defense units in the Caribbean. On Curaçao, about 60 tons of Red Cross relief goods are ready for transport by defense.
The Minister of Saint Martin has indicated that there is no need for emergency shelters. From Juliana International Airport, evacuees have been transferred to Curaçao again in the last 24 hours. The expansion of the water supply network is still slow. A specialist from the Netherlands is coming today to inspect the installations, where possible to repair and
to ensure that the quality of drinking water is high.
The first consultation on infrastructure (headed by the Ministry of Public Housing Environment Spatial Development and Infrastructure) was held yesterday. Dutch officials included, for example, Infrastructure & Environment, Social Affairs, the Red Cross and Defense. More and more NGOs arrive at Sint Maarten.
Yesterday, the Urban Search and Rescue (USAR) team was flown with a Royal Air Force C-130. The material of the USAR team arrives today throughout the day. The team will deal with the most critical recovery priorities, especially with regard to the infrastructure.
The seaport is now accessible for commercial shipping, but not all facilities (including port cranes) are yet to be used. Repairs are being done
executed. The port master’s expectation is that the port is fully operational several days after repair of the cranes. Zr.Ms. Pelican and Zr.Ms. Zeeland remain the support port authorities in the repair work. In the coming days, the arrival of two ships is planned (Majesty of the Seas and Royal Caribbean). Zr.Ms. Pelican prepares a redevelopment on Curaçao.
Airport facilities are restored to improve the loading and unloading of aircraft. The air traffic control is currently being provided by an American Air Traffic Control team, in good cooperation with Dutch military and local air traffic controllers. Security at the airport is under military control.
The Netherlands has withdrawn its largest naval ship from a major international practice in the Baltic Sea. Now that the damage picture on Sint Maarten is complete, it can be joint support
ship zr.ms. Karel Doorman is loaded with auxiliaries, vehicles and equipment. The strategic transport ship will enter Den Helder tomorrow, will be loaded the following days and according to the current schedule on Wednesday, September 20th, heading to St. Maarten. 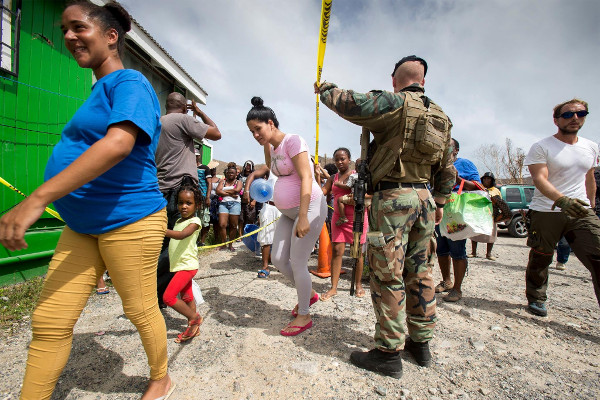 Water and rations will be handed out on a large scale to the people on St. Martin today.
Local authorities determine the locations of issuing points. Military personnel will support the authorities en guarantee safety.
Everyone on Sint Maarten is requested to listen to radio Laser (101FM). Locations and times of distribution will be broadcasted.
In the meantime of handing out water and rations today 12 shops in different districts will be supplied. Once supplying is successful these shops will become issuing points.
The intentions stated above can only be executed when distribution is possible in an orderly and safe way. Please listen to local personnel and follow their instructions.