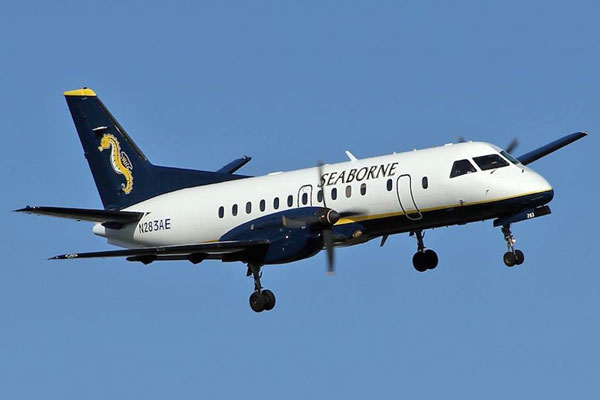 PHILIPSBURG:— Minister of Tourism Mellissa Arrindell-Doncher on Wednesday announced that Seaborne Airlines, after discussions with the St. Maarten Tourism Bureau (STB), have launched daily flights out of San Juan, Puerto Rico with the main purpose of driving prices lower on that critical route ahead of the busy Caribbean travel period normally experienced in June through August.

Additionally, the Minister also announced that STB has secured an agreement with Seaborne that will result in a 20 percent discounted fare for all locals out of St. Maarten. “They can book it online or by phone, and just have to present a valid local ID or Dutch Passport upon departure,” the Minister said.

“Seaborne will also as part of our incentive deal offer free travel vouchers when necessary for government to travel on business, saving the government (and thus tax payers) potential thousands of guilders a year as well. Seaborne will also be working with STB on servicing critical routes that have since been dropped by LIAT such as St. Croix and St. Thomas,” the Minister said.

The Minister explained that the intention is to create a sister-island relationship between San Juan and St. Maarten so that locals from each island can enjoy discount travel to one another’s destinations.
“St. Maarten is the big beneficiary here since our travelling market is much smaller than that of Puerto Rico. We aim to continue to create more benefits for locals travelling abroad by means of our route development plans with airlines, so the public can look forward to more incentives where possible,” the Minister concluded.
The offer is already active to request reservations and is valid to travel until October 15, 2017. To obtain the local discounted fares simply go to www.seaborneairlines.com and enter the promotion code: PRTC20 in the “evoucher” area when requesting flights or just simply mention the code when calling our reservations department at Toll Free: 866-359-8784.