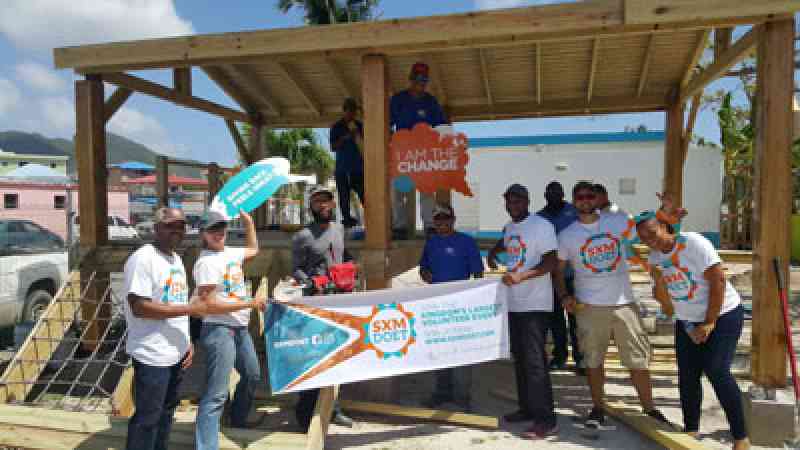 PHILIPSBURG:— Last weekend was all about SXM Doet, the largest volunteer initiative of the Dutch Kingdom, with the goal of motivating local projects that benefit the community. It was exactly the push that was needed to start what might as well be the biggest SXM Doet project this year, the playground of the Community Centre of Simpson Bay. Cherise Rambhadjan, one of the project leaders and parent of the Sr.Regina Primary School, explains: “The project was big, ambitious and much needed. Although it could never be accomplished in the two SXM Doet days, it did give us the budget to start things up and the motivation to make it happen. The days set by SXM Doet were also good as a deadline to keep the project moving along.”

The project got started about a month ago when parents and friends of the School helped clear the rubble on the playground that was still left after Irma. “That was the start we needed” said Rambhadjan “From there we got more and more people and companies involved. We had huge help from Arjen Vliegen, Home Comfort Service, about how best to rebuild and how to tackle the project as cost-effectively as possible. Our project then got moved forward tremendously when we got a crew and materials donated by Designers Choice, owned by Eric van Putten.

In the last phase, Armond Salomons from Upsurge B.V. joined the project giving us the final direction we needed. Working with these professionals really gave us peace of mind because it meant the structure was being built to be solid and safe for the kids to play with.”

“We received extra funds from Bente & Jip who raised money after Irma with their school the Chr. Basisschool de Elout and we even received a surprise Fun miles donation. Special thanks also goes out to FKG, GEBE, CC1, CGC and all the volunteers who did their part in bringing this project to what it is now. With SXM Doet as the motivator, the extra donations and the terrific team of people who helped us, we ended up doing way more than we envisioned we could when we got started.

Now the kids of both the Sr. Regina School and the Simpson Bay Community can enjoy a stronger and better playground and in the process we’ve gotten to forge some stronger bonds with fellow parents and friends.”