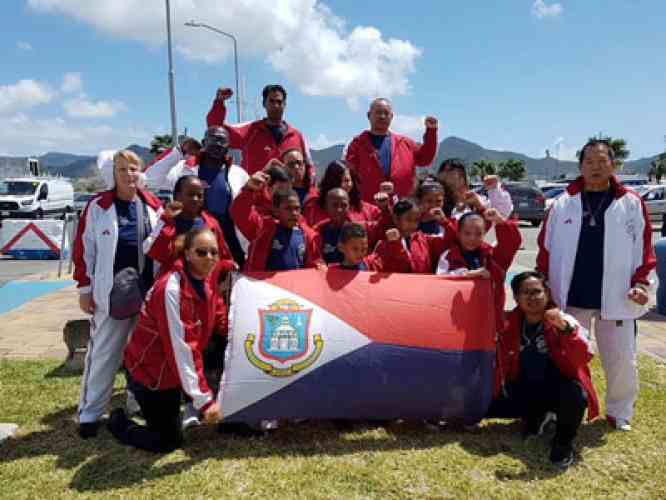 PHILIPSBURG:— King Yen Taekwondo School Grand Master, Theo Liu, and 12 athletes from St. Maarten are in Puerto Rico this weekend to compete against a host of Taekwondo schools from around the region.

In Puerto Rico the athletes will be competing in sparring and forms as they participate in the 25th Puerto Rico International Taekwondo Open Championship.

All the athletes said they are very excited about their trip and all are very proud to be representing St. Maarten against serious competition from Aruba, Barbados, Curacao, Jamaica, Dominican Republic, Martinique, Mexico, St. Croix, St. Thomas, Surinam, USA, US. Virgin Islands, Venezuela and host Puerto Rico.

The Grand Master and his team are joined by three parents and several coaches, all of whom are confident the St. Maarten delegation will be bringing home some well-won gold medals from several rounds of competition.

This is the first time since Hurricane Irma Struck St. Maarten and neighbouring islands, that the local-based Taekwondo school has ventured out to competition abroad, and according to the Grand Master, Liu, his students are once again ready to take on other schools and re-establish their strength in the sport before Hurricane Irma came calling.

“I want everyone to know that we are fully in support of this weekend’s tournament which has been promoted as a solidarity event to bring islands affected by Hurricane Irma back together to bring attention back to our sport,” said the Grand Master.

“It is very important for the King Yen Taekwondo School to show that despite what was caused by Hurricane Irma, we can keep St. Maarten youngsters and adults interest in the sport at all levels, including the level of international competition,” continued the Grand Master shortly before leaving the island with his team, parents, and coaches, Friday afternoon.