Home Local News Taxi Drivers plans to take action if government does not intervene and... 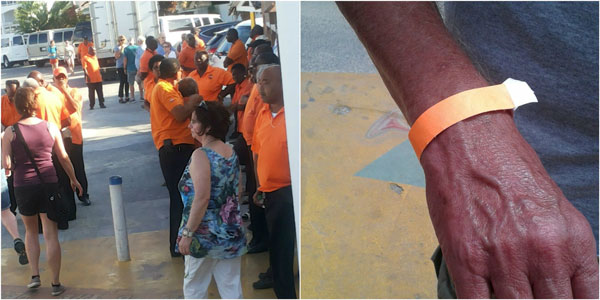 PHILIPSBURG:— Taxi drivers that are operating in Philipsburg and are not members of the Dutch St. Maarten Taxi Association (DSTA)plans to take action if government does not intervene to preserve their livelihood
Some of the taxi drivers gathered on Wednesday morning planning how to deal with a situation the DSTA started on Tuesday. The drivers said on Tuesday the DSTA began putting orange bands on the hands of the tourists and informed them that they are not to use any other taxi on the island. They claimed on Tuesday that the island visitors were sent to the French side with the same instructions but when taxi drivers on the French side objected and authorities got involved they informed the tourists that they do not have to comply with the instructions given to them by the DSTA and that they could board any legal taxi operating on the French side to take them to their destination. They said that on Wednesday the DSTA changed their strategy and they even placed their members in Philipsburg, at Sunset Beach Bar and Maho.
The disgruntled drivers said that the DSTA members are now sending tourists to Sunset Beach Bar, Maho, and ad Mullet Bay and back to the Harbor for $16. 00 per person and they are no longer allowing the visitors of the island to visit the French side.
They further stated that since the DSTA started this new project, the other drivers that are operating in Philipsburg but are not part of the DSTA cannot get work. “We will act and the actions we take will not be good for government, can you imagine government issued a taxi license to us and because we are not members of the DSTA we are not allowed to work and the same government that issued the license to us is allowing one set of people to take bread out of our mouths.”
On Wednesday at least two taxi drivers showed up at the government administration building to meet with the interim Minister of TEATT Rafael Boasman but they were informed that the Minister is off island and that there is no one to receive them.
SMN News tried to contact Prime Minister William Marlin by telephone since he is filling in for the Minister of Justice and Minister of TEATT but Marlin could not be reached.

Source: St. Martin News Network
Taxi Drivers plans to take action if government does not intervene and safeguard their livelihood.