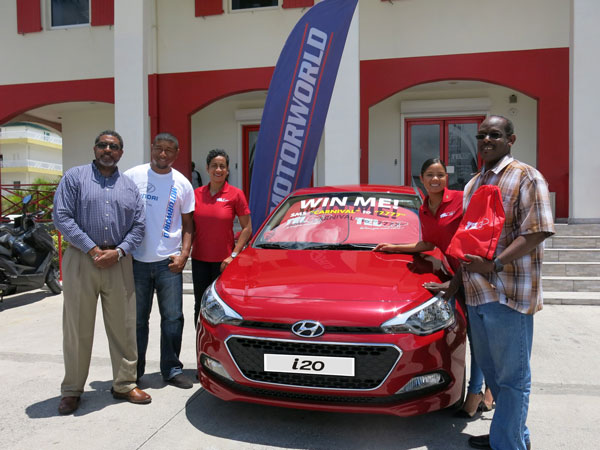 Pond Island:—The lucky winner of a brand new motor car in this year’s TelCell, “I Am Carnival” Car Raffle draw, has been officially named as Sales Rep. Mr. Vibert Richards.

According to the grand prize winner, a call that he was the winner of a prize that required him to be at the Festival Village, left him with no doubt that he would be taking home a brand new (name of the vehicle) to his family.

“When I entered for the TelCell SMS raffle only the motor car prize was being promoted so that was all I want thinking about when I went to collect my prize,” explained Vibert.

TelEm Group Chief Executive Officer (CEO), Mr. Kendall Dupersoy, and Manager Marketing & Sales, Grisha Marten, were both on hand last week to see Vibert take delivery of his grand prize at the TelEm Group main building on Pond Island. He also took home a Hyundai L575 Smartphone, a Hyundai Pulse Watch and a token for six-months of free gas from Texaco.
“I am personally very happy for him and wish him and his family many years of safe and enjoyable driving,” said Mr. Dupersoy.

The TelEm Group CEO acknowledged the part being played by TelEm Group and sister company TelCell, not only in the promotion of Carnival with creative themes like “I Am Carnival”, but also by giving back to the community in many different ways, from top rate prizes, to major sponsorships and hosting of flagship shows.

Manager Marketing & Sales, Grisha Marten, also congratulated the winner of this year’s motor car prize and other prize winners who were also announced in the Festival Village at the same time the motor car winner was announced.

The other winners were: Cuilian Feng ($50 monthly top-up for a year); Rolex Cheng (12MB internet for a year); Kyra Richardson (an IPhone 7Plus); Jeanine Davoren (a Samsung 7 Edge); Edmund Horsford (55” Smart TV) and Xavier Nicholas (a Go Pro Hero).
“From the time we announced the start of the promotion we were met with a terrific response from our loyal customers and also from many new customers who wanted in on the raffle to win a new car especially.

“I personally want to thank everyone for their participation, especially our co-sponsors, Marshall Motors, Texaco, Boolchands and Civil Law Notary office, Boekhoudt who notarized the draw. An extra big thank you to all my team at TelCell for their untiring input in coordinating with the various sponsors and Festival Village venue to get the message out about our participation in carnival for another year,” said Grisha.

She said, as promised, TelEm Group and its mobile provider TelCell are continuing to deliver on fun, exciting and creative promotions with prizes that are well worth winning.
“We are already well into our promotions for Mother’s Day, and encourage those who were not so lucky last time out to have a go and try to win a prize for Mom,” said Grisha.

April 21, 2021
0
PHILIPSBURG:— The St. Maarten is currently is experiencing island-wide internet interruptions, due to a problem being experienced from Jacksonville Florida. The ongoing internet connections...

Male victim encountered with gun shots wound in his car in Dutch Quarter ...

Male victim encountered with gun shots wound in his car in Dutch Quarter ...