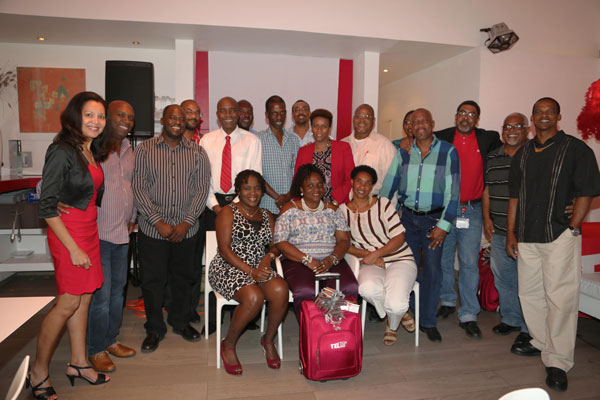 This year’s celebrants together clocked in more than 475 years in TelEm Group service, marking 20, 25 and 35 years with the company.

Also taking pride of place with her colleagues was another long time worker, retiree Silvina Mathews, bringing to three, the number of retirees in the company this year, with retirees, Anthony Haddocks and Stanley David having already enjoyed retirement celebrations this year.

As with previous events of its kind, this year’s Jubilee celebration afforded management the opportunity to thank its employees for their work over many years in a special gathering of colleagues, friends, and family.

Chief Financial Officer, (CFO) Mrs. Helma Etnel, thanked her Executive Assistant for many years, Mrs. Rosita Holaman Gumbs, for the special bond they have developed over the years and for her loyalty, confidentiality, and professionalism, noting that Mrs. Holaman-Gumbs comes “with a heart that is honest and sincere.”

Mrs. Etnel Also singled out Manager, Procurement Department, Carmen Lake-Reyes for her passion and flexibility in the workplace having switched from Marketing & Sales to Business Development before moving to her present position.

“I want to thank you all but I also want to thank your families because they have also allowed you to give up most of your time in the company of your colleagues and in the service of TelEm Group where you have actually spent so much of your life,” said Mrs. Etnel.
Amongst others in the Finance & Accounting Division who were also recognized by their Manager, Mrs. Marie Louise Holiday were Nadia Rombley, who could not be present but was represented by her daughter and Melisca Fergus.
A good number of the celebrants hailed from the Technical Department, headed by Chief Technical Officer (CTO) Mr. Eldert Louisa, who was himself celebrating 20 years in the company. Mr. Louisa took the opportunity, along with Manager Outside Plant, Mr. Marco London, to personally thank each of the workers of the Division as they stood in the spotlight to be recognized.
Mr. Louisa paid tribute to all of the workers in his division celebrating their Jubilee, saying that he was very grateful and thankful for their input over the years. To those retiring and those soon to retire, he held out a hand that they could utilize their many years of technical and planning experience by continuing to provide services for the company – albeit in a different capacity.

TelEm Group Chief Executive Officer (CEO), Mr. Kendall Dupersoy, congratulated everyone on behalf of management and personnel and afterward sought out each celebrant to shake their hand and wish them well.

Mr. Dupersoy shared some additional words and information about 20-year veteran Percival Cocks, with whom he had been working when he was previously with the company.

“Percy had a habit of helping everybody at the same time even if it meant helping someone to fix a printer while 500 people couldn’t log into the internet,” said Mr. Dupersoy to a stream of laughter.

The TelEm Group chief referred to the company as having a “Family-type” atmosphere where workers are very welcoming to new staff and new technology because of the contribution of its veterans who set the tone for continued development in the company by preparing younger workers in a very positive way.

“You all deserve this moment of recognition and thanks from management and your colleagues and especially from me,” said the CEO, who also thanked the Human Resources & Development Department for making all the arrangements.

Manager, Human Resources & Development, Mrs. Shadira Lont, doubled up as Mcee for the event, bringing life and merriment to the occasion also recognizing that one of her own, Human Resources Assistant, Carmita Brooks, who usually arranges the event, was on the receiving end for a change, having also celebrated 20 years with the company.

“I want to congratulate Carmita and all the Jubilees for this year. You are all helping to make TelEm Group the great company that it is,” said Shadira, who also thanked management for their kind words, entertaining duet (Essence & Roxy) for some sweet sophisticated sounds, Izi Management and staff for outstanding service and food and employee Glen Hazel for an impressive rendition of Wonderful World, by Louis Armstrong.