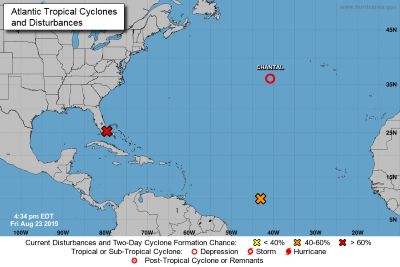 PHILIPSBURG:— The National Hurricane Center is issuing advisories on Tropical Depression Chantal, located about 765 miles west of the Azores. 1. Surface and radar data, along with satellite imagery, indicate that the low-pressure area just east of the coast of southeastern Florida is becoming better organized. The low is forecast to move generally northwestward near or over the eastern Florida peninsula through tonight, and then move northward to northeastward over the Atlantic near the east coast of the central Florida peninsula on Saturday. After that, the system is expected to move northeastward offshore of the southeastern United States coast. If the current trend continues, a tropical depression is likely