Home Local News Ticket promotion for TelCell Night of the Hit Makers sells out in... 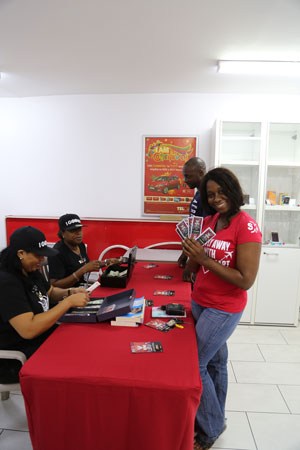 Pond Island:— It was billed as a 25-25-25 ticket promotion, however, it was the number 15 that captured all the attention during tickets sales Saturday, for Carnival’s Flagship show – TelCell Night of the Hit Makers. Bang on 25 Minutes past noon, on the 25th day and selling for $25, show promoters, Extratight Entertainment began their ticket promotion sale for those keen to purchase their tickets early.

The sale was held at TelEm Group’s Grand Marche branch and was expected to last one hour, however, due to the huge number of music lovers waiting inside and outside, it was all over in just 15 minutes – with all 200 available $25 tickets completely sold out.

“It was just crazy,” said Extratight Entertainment sales team, Shasca Fleming-Rey, and Nalajsha Agard, who were caught off-guard by the number of persons standing in line to purchase four and five tickets at a time.

“Unfortunately we had to disappoint quite a few people when the supply of $25 tickets ran out, but after people requested $30 tickets, we were able to oblige them even though that was not the plan for the day’s promotion,” said Shasca.

She said the music fans seemed more than happy to pick up their tickets at the higher price with many of them determined not to return home empty-handed.

“We are very excited and thrilled that there is so much interest in what “Mr. Rude” is planning for our 5th Anniversary Night of the Hit Makers,” said Shasca, hinting that there are sure to be other promotions and giveaways for the show from the promoters and also from the show sponsor, TelCell before the actual night.

“We had the same kind of interest shown two years ago when we also sold out at this time, so everyone, get ready to rock the Festival Village. Anyone who is not there on the night will be missing out on something really special,” stated Schasca.