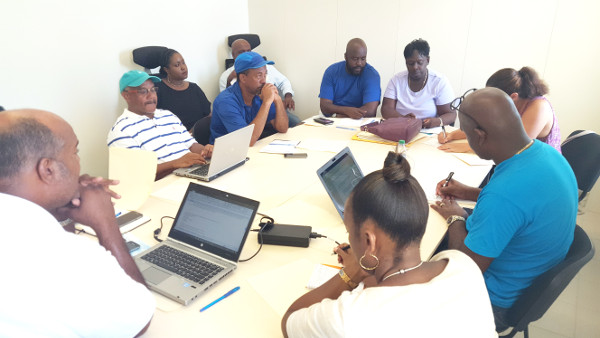 PHILIPSBURG:— Minister of Tourism, Economic Affairs, Traffic and Telecommunications (TEATT) Mellissa Arrindell-Doncher met with the management team of TEATT on Saturday to discuss strategy and actions moving forward for the entire Ministry.

Discussions during the meeting on Saturday centered around the Ministry’s vital input in drafting a short and long-term economic recovery plan, with a tourism recovery plan at its core. The formalizing of this cohesive plan will also include other departments and arms of government, however, the Minister stressed, TEATT because of its sheer nature will play an important role.

The Minister has been active with coordinating relief flights into St. Maarten from commercial airlines as well as evacuating people via these same airlines and military flights. She has now shifted focus to the economic recovery plan that will be drafted.

“Together with private sector partners we must develop a vision, goals and projects that would move St. Maarten along the road to full recovery,” the Minister said, adding that an economic summit was already in the planning pre-hurricane Irma. The destruction wrought by hurricane Irma, she said, puts that initiative in a completely different light with added urgency.

“We will have to rebuild our economy based on our strengths and diversify our economic engines. The economic impact of the storm will not be clear with any degree of accuracy for a while, but we expect Irma to be the most costly hurricane in the history of St. Maarten when all is said and done.

“It is obviously disruptive to an economy that already was facing challenges. Our plan moving forward must focus on realistic recovery goals, sustainable reconstruction long-term revitalization of the economy. Everyone’s input would be vital,” the Minister said.

The Minister noted positively that there is no shortage of advice being offered from many of St. Maarten’s strategic partners such as Carnival Cruise Lines, Royal Caribbean Cruise Lines, various airlines and others. Moreover, she expects to get on the same page with entities such as the Chamber of Commerce and the St. Maarten Hospitality & Trade Association (SHTA) sooner rather than later.

The management team of the Ministry consists of all department heads of the seven departments for which the Minister is responsible. Though she was briefed in general over the past few days, the Minister used the opportunity to formally ascertain the functioning capabilities of the departments and the well-being of the staff.

Press Release from Ministry of TEATT