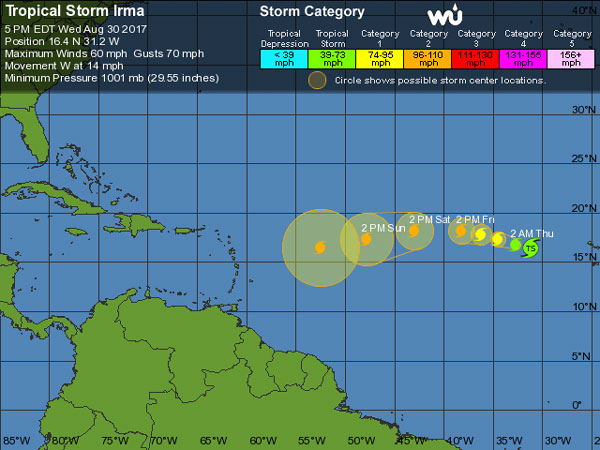 Irma formed from a wave off the African coast, west of Cabo Verde on Wednesday. The NHC officially began sending advisories at 11 a.m.

“We can see Irma with 60 mph winds, thousands of miles away at this point,” Storm Team 8 Chief Meteorologist Steve Jerve said. “But this is the position these storms are in this time of year.”

The latest advisory from the NHC says Irma is moving toward the west at about 15 mph and is expected to become a hurricane on Thursday or Friday.

“There’s still a lot of question marks on this, but it’s one we’ll have to watch,” Chief Meteorologist Jerve said. “You look at the computer models and the way they’re moving, because it’s in that westerly fashion toward the Caribbean, toward the area of North America and the state of Florida. We’ll have to watch it very closely but this is some time away, probably 10 days or so. But it’s one we’ll monitor.”

Irma is the ninth named storm of the Atlantic basin tropical season.