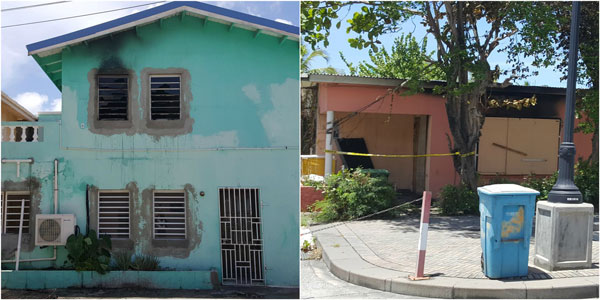 PHILIPSBURG:— On Tuesday, May 30th and May 31st police patrols and Fire Department were dispatched to two separate home fires. The first fire was reported at Marianna Estate 5-a in Cole Bay at approximately 09.30 p.m. On the scene the investigating officers encountered bystanders who were trying to extinguish a fire on the upper floor of the apartment building. The Fire Department arrived shortly after immediately and put the blaze out. The electrical malfunction may have been the cause of the fire according to the owner and occupant of the apartment in question. No one was injured as a result of this fire.
The second fire was reported at approximately 01.00 a.m. when police and Fire Department were sent to E. Camille Richardson Street # 12 for a house on fire. The fire was immediately brought under control by the Fire Department. Damage to the home was minimal; however, the occupants of the home had to be evacuated and suffered some discomfort of smoke inhalation. They were treated by paramedics on the scene. The Fire Department could not determine the cause of the fire at the time and it is still under investigation.