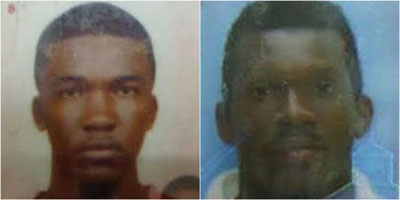 MULLET BAY:— On Saturday March 25th, 2017 at approximately 4:00pm two men who went swimming at Mullet Bay beach were reported missing. The seas were quite rough and according to witnesses one of the men was calling for help while swimming. The other had gone to help and shortly after they disappeared under the water. They were not seen since and are suspected to have drowned. The Coast Guard carried out an intensive search until late in the evening hours to try to locate the victims to no avail. Family members of the victims were informed of the situation. The missing persons were identified as Samuel Blaise (22) and Jeef Stephane (22).
On Sunday March 26th, 2017 at approximately 1:30pm while the Coast Guard continued the search for the missing persons a sea bather encountered the bodies of the victims. The Coast Guard was immediately informed and went on to remove the bodies from the water. The bodies were taken to the Coast Guard Building in Simpson Bay where Dr. Mercuur pronounced the death of the victims and stated that the cause of death was drowning. Detectives and Forensic Department were also on the scene.