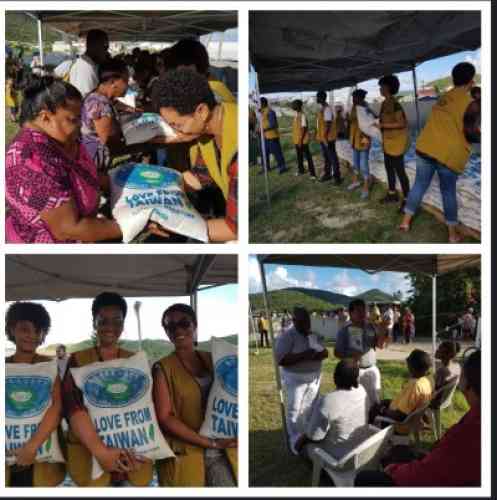 PHILIPSBURG:— A total of 600 families in French Quarter received one or more bags of “Love Rice” from the St. Maarten Tzu Chi Foundation, during its second rice distribution effort to persons in that district since hurricane Irma.

The rice distribution, which was held on 23 September 2018, was possible thanks to the donation of the fifth container of rice to St. Maarten from Tzu Chi’s headquarters in Taiwan and the third container since hurricane Irma. The distribution was from the latest container of rice, which arrived on the island on 12 September 2018. On August 5, Tzu Chi also came to the aid of French Quarter residents when 500 bags of rice were distributed in the area. Each bag of rice contains 10kg (22 pounds) of rice.

Tzu Chi volunteers lovingly spent their day coordinating the event and making sure that the rice distribution, which was held on the premises of the Cultural Center, went smoothly.

The donation of the rice was done under the theme: “environmental protection -love the world,” a position that Tzu Chi hopes recipients will follow to protect our precious environment.

During the ceremony, attendees were also given a chance to help Tzu Chi continue its benevolent work in the community by making donations via the foundation’s “Bamboo Bank” (collection boxes). A total of US $99.33 was donated to the foundation during this drive.

Recipients were initially given one bag of rice per family and based on the needs of each family, the second bag of rice was also given to some recipients. Elderly persons and persons with babies received assistance during the distribution.

Recipients were also treated to snacks and drinks. A total of 45 Tzu Chi volunteers participated in the event, 15 regular volunteers and 30 new enthusiastic ones.

Rice from this latest container received in September was also distributed by volunteers to the homes of 400 residents in Dutch St. Maarten, who were in need as well as to various organizations including 30 days care and pre-schools in Dutch St. Maarten. A total of 1,200 bags of rice were also distributed to persons in the district of Sandy Ground in French St. Martin; 400 to the English de due Caller de la Benediction inc; 100 to Iglesia La Bonne Samaritaine Church; 60 to Ruel Hotel #44 and 40 to individual families.

Tzu Chi Commissioner Sandra Cheung said she was grateful to all volunteers who sacrificed their time to participate in the exercise and all recipients for accepting the donation of Love Rice from the foundation.