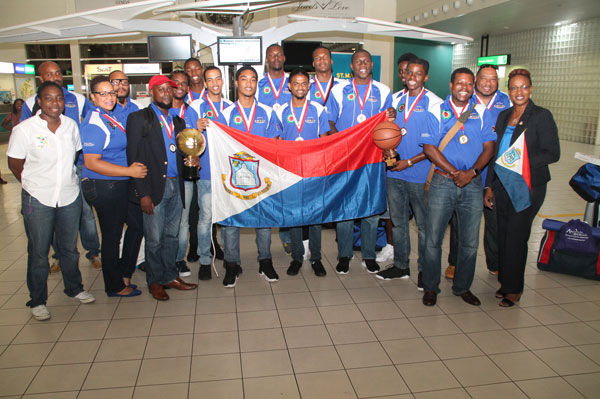 Airport Road:— On Monday, August 28th, the U20 National Basketball team returned from Antigua after defeating St. Kitts, where the team won 82-76 in the LIBA tournament. In 2015, the St. Maarten National team came in second place, but this year, they brought home the championship. The MVP was Mr. Jamal Ireland, an 18-year-old student of the Milton Peters College.
“The Minister told Ireland and the rest of his team that she expects to see great things from the entire team.” Majority of the team will still be in school and under 20, allowing them to still be eligible to play at the next LIBA tournament.
Head of the Department of Sports, Jonelle Richardson, also congratulated the team, their coaches, the referee and physio therapist, who traveled with the team. “We are happy that you guys did really well. 2015, you came in second, but this year we are topping it and that’s a great accomplishment for your team and St. Maarten.”
According to the coaches and Ms. Maria Richardson of Dreams to Reality Foundation, scouts showed interest in several youngsters, especially Ireland, even after the very first game. The Foundation and Sporting Federation will follow up with them to be able to help the players to progress even further and realize their dreams. Ms. Jonelle Richardson also thanked Ms. Maria Richardson for organizing and making the trip a reality for the team.
The Ministry of Education, Culture, Youth, and Sport (ECYS) continues to promote National Team Development and pledges to continue to assist athletes to realize their fullest potential in collaborating with National Sports Institute (NSI) and all other organizations with similar goals. The Ministry ECYS would like to once again congratulate the U20 National basketball team on capturing a historic win at the LIBA tournament.

October 21, 2021
0
PHILIPSBURG:--- On October 22 at 3.30 pm, APS will host a webinar about the measures taken in 2021 to keep the pension fund future-ready. These measures included the decrease of the actuarial interest rate, the adjustment of the mortality table,...
Read more

October 21, 2021
0
~ 4 new members appointed to existing SBOD.~ PHILIPSBURG: --- Workers at GEBE powerplant in Cape Bay down their tools on Thursday to support one...

October 21, 2021
0
~ 4 new members appointed to existing SBOD.~ PHILIPSBURG: --- Workers at GEBE powerplant in Cape Bay down their tools on Thursday to support one...

Committee of Public Health, Social Development and Labor to meet on Thursday. |...

Readers are Leaders is Back. | SMN NEWS