PHILIPSBURG:— The President of University of St. Martin (USM) dr. Francio Guadeloupe has issued a strong plea to government asking that they make it a priority to educate its populace.
Guadeloupe who took over the helm of USM since 2014 managed to get two of USM’s major programs accredited in the UK. The President of USM made the information available to reporters on Wednesday. Guadeloupe said that government must take heed because St. Maarten’s economy is tourism and business and in order to compete, government must place focus on educating its people in order to compete fairly. He made clear that the neighboring islands will also focus on the kind of infrastructure such as the harbor and airport and the only way to survive is to have educated people from home.
He said with hard work and perseverance he managed to get the Business and Hospitality program accredited in the UK which is recognized throughout the European Union. Both programs are level five accredited. However, Guadeloupe needs more than the promissory note he received from Minister of Education Silveria Jacobs to sustain the accreditation. He said that government must be able to pump at least NAF3M annually into the local university in order for the school of higher learning to maintain its accreditation. “The only way USM could hold the accreditation is if the government of St. Maarten truly fund the institution, if government does not fund the institution then USM will lose the accreditation and St. Maarten (USM) will have restart the process.” With the new agreement students interested in studying Business and Hospitality, the two main programs that drive the economy of St. Maarten would enable any student who began their studies on St. Maarten to continue their education anywhere within the EU to obtain their bachelor’s degree. He said the credits accumulated within the first two years of studies locally could be transferred to any University within the European Union where students could complete their studies to obtain their bachelor’s degree.
Guadeloupe said a total of 8 FTE would be needed for the two programs, the lecturers would have to work at the institution from 9 am to 5 pm. Guadeloupe said that government has to put in place a law for tertiary education which has to be adopted by the Council of Ministers. He said that USM is waiting patiently for the law to get enacted because that is the only way for USM to get full financing from the Government of St. Maarten. Besides holding the accreditation with financing from government, the institution could also lower its tuition fees in order to attract more students locally and from the neighboring islands. Guadeloupe said that government should make it mandatory for students that get study financing from government to begin their education at home before leaving to continue their studies overseas at government’s expense. Guadeloupe said that the other countries within the Kingdom such and Aruba and Curacao have taken the initiative to fully finance their universities and St. Maarten must follow the same path in the interest of its people. Guadeloupe said he taught at several universities in the Netherlands and all of them are financed by the Dutch government. He said islands such as Antigua has taken the same decision to finance their learning institution because the government there saw the need to have an educated populace.
Guadeloupe said that USM teaching program from Bachelors to Masters is fully accredited through the University of the Virgin Islands making the Teaching Diplomas recognizable throughout North America. Guadeloupe said the only program that has to be accredited is the General Liberal Arts which is being worked upon but financing is the key to all of this.
Another bright side for USM is the expansion project which is slated for later this year. The President of USM said that businessman Danny Ramchandani has pledged to support USM in getting the institution at least 40 rooms which will be used as dormitory for students coming from neighboring islands, he said the businessman believes that if people from the neighboring islands could shop on St. Maarten they would also send their children to the island to study. He said this will not only help strengthen the school of higher learning but the economy in Philipsburg will strive again especially at nights.
While Francesco Guadeloupe a known educator in the Netherlands has worked on achieving the much-needed accreditation for USM he has only one more school year on St. Maarten as he intends to leave USM by September 2018 to return to the Netherlands. 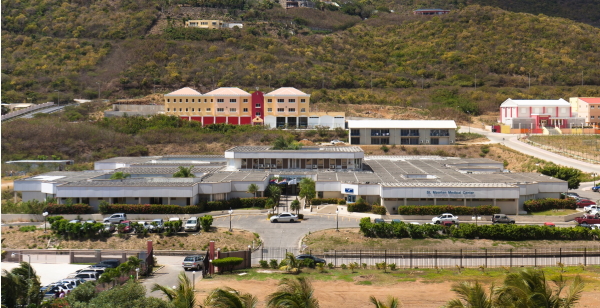 September 27, 2022
0
~Patients are now allowed one visitor per visiting hour~ CAY HILL:--- In light of the decrease in active cases of COVID-19, St. Maarten Medical Center (SMMC) has adjusted its patient visiting policy. The amended policy goes into effect on Tuesday,...
Read more