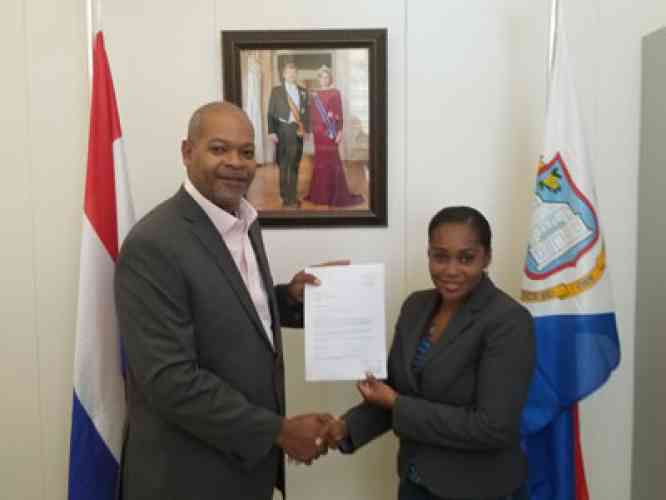 PHILIPSBURG:— Valya Lake-Pantophlet, who’s contesting in the upcoming snap election as the number 5 on the United Sint Maarten Party (USP) submitted, submitted multiple pieces of draft amendments to existing legislation to the Government and Parliament on Thursday, February 22, 2018.
The first amendment is to the Rent Ordinance, which allows the rent committee to regulate rent prices for homes with a value of up to Naf 650,000. This particular amount in the legislation has not been updated since 1939. The new amount is based on research into the current value of dwellings (the actual living space to be rented, not the entire building) on Sint Maarten. The draft amendment was submitted to the Minister of Justice, the Hon. Van Hugh Cornelius De Weever, with copies sent to the Honorable Minister of VROMI and the Chairlady of Parliament. Minister De Weever and Lake-Pantophlet exchanged a few words prior to the handover, citing a willingness to work together for the people of this country, especially in the aftermath of Hurricane Irma when rent prices have skyrocketed.
The second and third amendments pertain to electoral reform. Lake-Pantophlet has been heavily championing electoral reform this campaign season and informed the public that she is working on 4 proposals in total, but that these two are now ready for legal vetting and discussion. The two proposals are:
1. Top 15 vote-getters across the board are elected to Parliament, thus abandoning the alignment of seats to parties;
2. The introduction of the election of Ministers as opposed to the appointment of Ministers.
Options 3 and 4, which are still being further worked out are:
3. A combination of points 1 and 2;
4. The introduction of district-based elections, similar to the Westminster model.
The intention is to take these proposals to the people in the form of a referendum in order for them to decide which system they would prefer. Lake-Pantophlet is also working on legislation to reduce daycare costs, but it requires more time. “I have always been solution oriented and proactive in my daily vocation. The people deserve real representation in Parliament, who do the work, rather than talk the talk. This shows how serious I am about the responsibility that the people are willing to entrust me with” Lake- Pantophlet said.