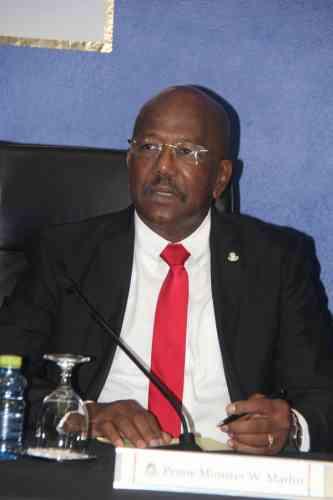 PHILIPSBURG:— Former Prime Minister William Marlin says the 2018 Belt and Road Forum for Latin America and the Caribbean, which is scheduled for Sint Maarten in July, can be a significant boost for the country, which is still reeling from the effects of hurricanes Irma and Maria in September last year.

He said, however, that given the impact of the September hurricanes, it is imperative that mechanisms be put in place to ensure the safety and security of delegates to the forum. Some 400 persons including an estimated 200 developers and business persons from China as well as a number from Latin America and the Caribbean are expected to attend the forum in St. Maarten.

Marlin said one of his concerns at this stage is the availability of proper accommodation for attendees given the impact Irma has had on the hotel sector.
Marlin said, he, however, has an idea that may very well provide the necessary accommodations for the attendees as well as for the actual hosting of the meetings.

While serving as Prime Minister, Marlin was instrumental in negotiating for St. Maarten to be the destination to host the forum this year, when he attended the One Belt, One Road Forum for International Cooperation in Beijing, China in May last year. He was the only Head of State from the Caribbean to attend the forum, also attended by Russian President Vladimir Putin, Philippine President Rodrigo Duterte, Turkish President Recep Tayyip Erdogan, Chinese President Xi Jinping and representatives of some 80 organisations including the United Nations, World Bank, and International Monetary Fund.

The Belt and Road initiative aims to increase international cooperation on the basic principles of mutual discussion, mutual construction, and mutual sharing. The initiative is now in its fifth year.

The forum set for St. Maarten this year is expected to be developed and funded by the Caribbean China People Foundation and China-based Beijing Sustainable Committee.

Marlin alluded to the meeting between Dutch King Willem-Alexander and Chinese Prime Minister which was held in China earlier this month, where the Netherlands and China agreed to carry out more mutually beneficial cooperation through joint implementation of the Belt and Road Initiative in 2018.

Similar to King Willem-Alexander pledging his support to the Belt and Road initiative during that meeting, Marlin said this is also one of the things that he had also pursued and championed, while he had been in office.

“I was honored to be the only Head of Government from any Caribbean country to attend the Belt and Road forum in China last year. It was attended by thousands of persons from around the globe. What we negotiated and agreed upon was that the Belt and Road for the Caribbean and Latin America would be held in St. Maarten. We did not know at the time that a major catastrophic hurricane would affect our plans”, Marlin said. “If all goes well, the National Alliance will be back in office by April 2, at least that is the plan of the people of St. Maarten, and we can make sure that all is in place for the forum to be held here. One thing is certain: the forum will offer a significant boost to our country at this time”.