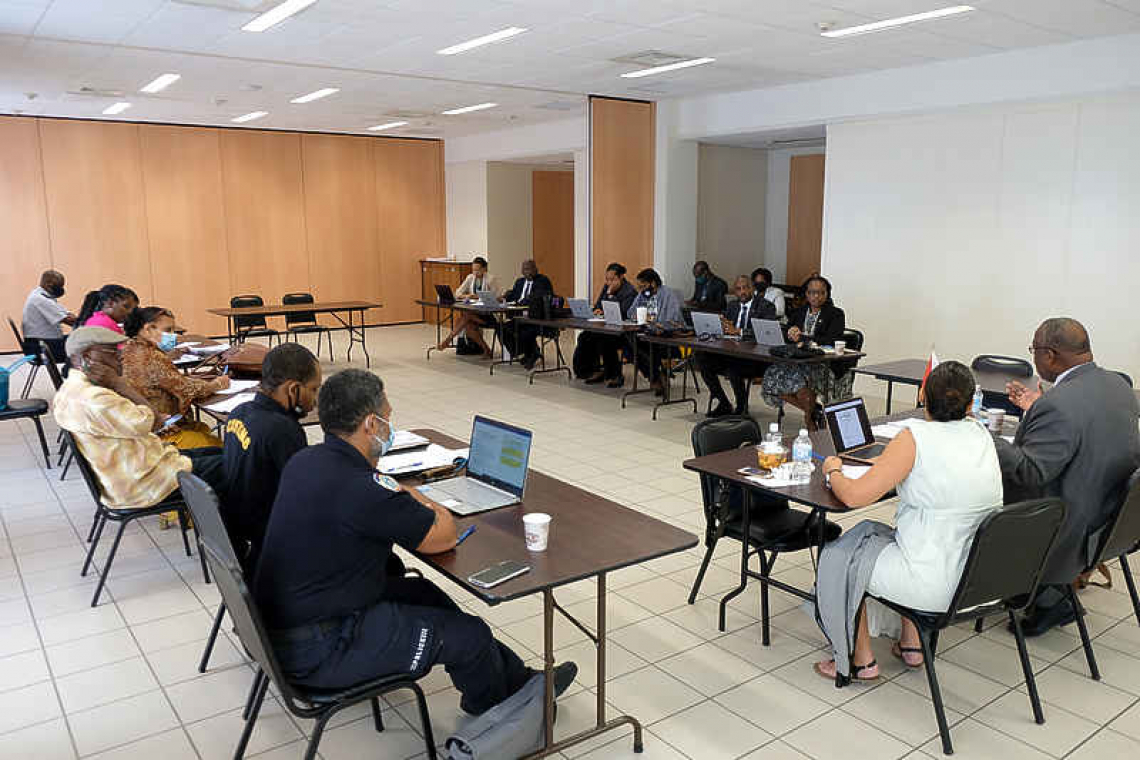 A scene during the meeting.

PHILIPSBURG–The Council of Ministers (COM) continued their discussion on the 12.5-per-cent cost-cutting measures on employment benefits with representatives of unions in the Committee for Civil Servants Unions (CCSU) on July 26.

After calculations were finalised by the Ministry of Finance, the government paid out three per cent (50 per cent vacation allowance) withheld since June 2020 during the first two weeks of July 2021.

During the meeting, Irion presented two proposals from the government per article 112h of the National Ordinance on Substantive Civil Service Law LMA, given that the Constitutional Court’s verdict is still outstanding.

The first proposal represented a package to cover the three per cent (50 per cent vacation allowance) already paid out. Parties agreed that the three per cent vacation allowance 2019-2020, paid out to government workers based on June 29, 2021, will be compensated by a reduction in the vacation days (2019-2020: by 2.8 per cent) and the elimination of payment of overtime across the board except for the Ministry of Justice (0.2 per cent).

The second proposal regarded the payment of the 2020-2021 vacation allowance, owed. Although liquidity remains a challenge, government intends to pay out the balance of the six per cent owed for 2021.

Parties agreed that government would look into the possibility to consider the benefits mentioned in article 112h of the LMA, as personnel-related benefits. In so doing, some of the “benefits” such as travel expenditures, uniform allowances and compensation for the use of personal vehicles to execute work-related services could be accepted by the Committee for Financial Supervision CFT as personnel-related benefits and be cut accordingly.

Jacobs: “These quarterly meetings will continue together with the Council of Ministers and the CCSU members in the interest of our civil servants. We will also meet again with the union members once the Constitutional Court renders its decision on the petition of the Ombudsman regarding the 12.5 per cent cost-cutting national ordinances.”

Discussions on the issuance of the six per cent vacation allowance owed will resume once government has information to share with the CCSU membership.