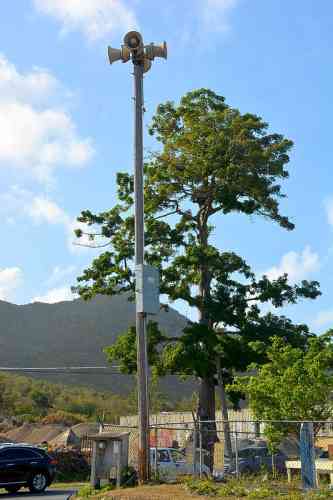 PHILIPSBURG–The Fire Department and Disaster Management are currently in the process of removing the old siren warning system that was established many years ago in different flood-prone communities.

The removal process entails the remnants of the siren warning system and poles to which they were attached, according to the department on Tuesday.

The department recently presented a project proposal to the Recovery Trust Fund managed by the World Bank for a new resilient community siren warning system. Discussions are still taking place with respect to which option is best suited for the country.

The first siren warning system was installed 13 years ago (2006) in response to a cloudburst event in 2005 that resulted in flash floods in the Cul de Sac basin that led to two people losing their lives due to this natural phenomenon.

The first phase of the system of seven warning sirens was installed in flood-prone areas: Dutch Quarter, Cul de Sac basin, Cole Bay, Madame Estate and Philipsburg. It was the intention to install a country-wide siren warning system, but after an assessment of the first phase, the evaluation revealed that the system was susceptible to corrosion and lightning strikes, according to the department.

The quality of the alert sounds was also not up to par due to the topography and trade winds, and therefore it was decided not to continue with this type of system, but to look into alternatives. The warning sirens that were still operational were maintained for as long as it was feasible. Alternatives to the existing old system have been found and these come at a large cost, and funding is being sought from the post-Hurricane Irma Trust Fund.

The project proposal includes a cell broadcast system and the replacement of the warning sirens. In the meantime, the Fire Department will soon launch a disaster app that the public can install on their cell phones where they will be able to view and read the latest official information and weather reports from official government sources, such as the Department of Communication DComm and the Meteorological Department of St. Maarten (MDS).