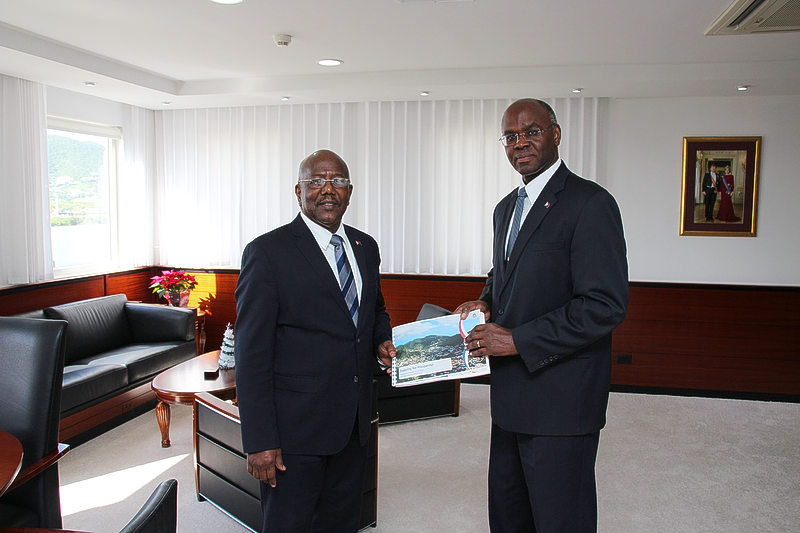 HARBOUR VIEW–Governor Eugene Holiday received the final report on the composition of the incoming cabinet and the Governing Programme 2016-2020, entitled “Stability for Prosperity” from formateur Prime Minister William Marlin on Friday. The presentation of the report paves the way for the ministers to be sworn-in on Tuesday, December 20, at 10:00am at the Governor’s Office.

The swearing-in, which will not include a separate minister for tourism, economic affairs, traffic and telecommunications TEATT, comes a week shy of the three months make since the September 26 Parliamentary Elections. The minister candidate for TEATT Cecil Nicholas is “still ongoing, but nearing completion,” the United St. Maarten Party (US Party) which he will represent, said in a press statement.

The incoming cabinet is supported in Parliament by the National Alliance (NA) with five seats, US Party with three seats and the Democratic Party (DP) with two seats.

The new cabinet will, among other things give priority to realizing sustainable public finances, to realizing waste management solutions, to further improving the access to and quality of health care and to securing the safety and security on St. Maarten, according to a release from the Governor’s Cabinet.

The vetting of the minister and minister plenipotentiary candidates, based on the pertinent principles regulating the appointment of ministers, has not produced any data that would impede their appointment.

Marlin will continue on as Prime Minister and Minister of General Affairs.

Rafael A. Boasman will become Minister of Justice, Acting Minister of Tourism, Economic Affairs, Traffic and Telecommunications and Acting Prime-Minister.

After the swearing-in ceremony, the Governor and the newly appointed Ministers will have the constituting meeting in the Government Administration Building.