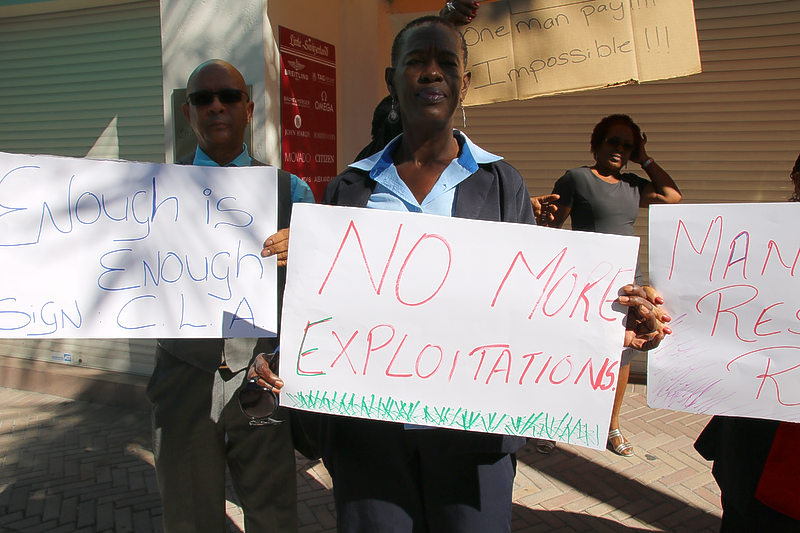 PHILIPSBURG–A group of just over 20 Little Switzerland workers from the establishment’s Front Street and Port St. Maarten locations downed tools in protest action for a about two hours on Monday, to send a strong message to management that they would like their Collective Labour Agreement (CLA) finalised and signed post haste. Failure of management to take quick action in finalizing the CLA will result in workers continuing their action indefinitely.

Little Switzerland’s management could not be reached for comment.

The action began around 8:30am on Monday and wrapped up around 10:30am, at which time the workers returned to their posts.

The placard-bearing workers stood outside Little Switzerland’s Front Street store with a representative of their union to draw attention to their concerns. Some of the placards read: “Enough is Enough,” “No more exploitation,” “It’s long overdue, stop intimidating us and appreciate us,” and “Equal rights.”

At the heart of the workers’ concerns is the lengthy time management is taking to finalise the new CLA, Workers Institute for Organised Labour (WIFOL) President Theophilus Thompson told The Daily Herald. He said parties have been engaged in talks for a new CLA for some three years now and it has not yet been finalized.

The company went under new ownership about three years ago, around the same time that the union won a referendum to represent the workers. CLA talks have been ongoing since then.

According to Thompson the CLA talks is now being mediated by mediator Rafael Boasman and has been at a standstill for the past month as management has yet to respond to some points in the CLA for about a month now.

Other concerns of the workers include discrimination in the payment of long serving staffers and persons recently brought in to work at the stores; the changing of some working conditions without the input of workers and the refusal of management to reimburse workers for using their personal funds to purchase company uniforms, amongst other things.

It should be noted that after the protest action, Thompson met with a recently appointed manager at the establishment, who informed him that the Human Resources Manager at Little Switzerland’s Head Office in St. Thomas will get in touch with him later today. The new manager was not involved in the negotiations as the person recently assumed the post and Thompson said the meeting was more of an introductory one.