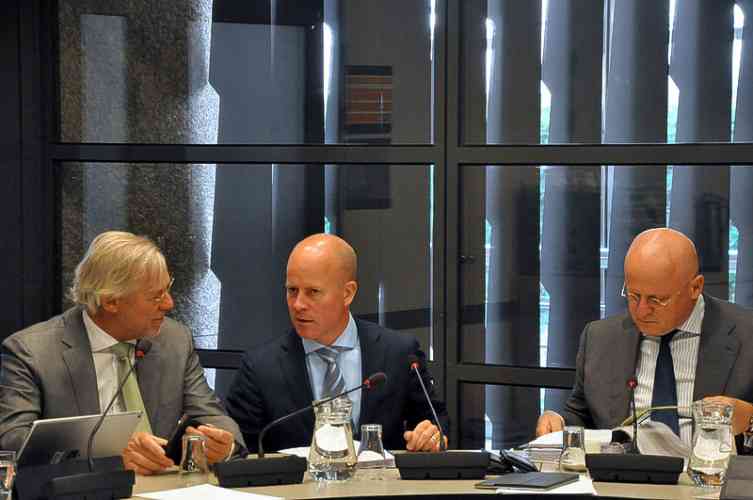 THE HAGUE–Dutch Minister of Justice and Security Ferd Grapperhaus on Thursday expressed his deep appreciation for the law enforcement personnel in the Windward Islands, but also for the St. Maarten people who have shown such resilience after Hurricane Irma.

He shared his positive message during a general debate with the Permanent Committee for Justice and Security of the Second Chamber of the Dutch Parliament on Thursday to discuss the state of affairs of the law enforcement system in Bonaire, St. Eustatius and Saba. Grapperhaus is responsible for justice in the Dutch public entities.

Grapperhaus’ visit to St. Maarten left a deep impression on him and he spoke from the heart during Thursday’s debate when he described the devastation that Hurricane Irma caused. He especially felt for the poorer part of St. Maarten’s population, who were the hardest hit. “I was deeply moved by what I saw and heard. But I was also impressed by the resilience of the people.”
He also lauded the work of Dutch law enforcement officers who have been stationed in St. Maarten since the hurricane. Personnel of the Dutch Judicial Institutions Service DJI have been assisting at the heavily damaged Pointe Blanche prison, while Dutch police officers have been temporarily assigned to the St. Maarten Police Force KPSM. He complimented everyone for their cooperation. “My impression is that St. Maarten is benefitting from the assistance.”

State Secretary of Home Affairs and Kingdom Relations Raymond Knops said the minister’s visit to the Windward Islands had been very positive. He said it was important for the individual ministers to visit the islands so they could get acquainted with the local situation and meet with authorities. Knops too lauded the work of the law enforcement personnel in the Windward Islands who work under difficult circumstances.

He gave an update on the hurricane season preparations in St. Eustatius and Saba and the developments after last year’s storms. He said Saba had handled its issues swiftly after the hurricanes and the crisis management system was functioning well.

The Fort Bay Harbour, to which he referred as Saba’s lifeline, suffered extensive damage. The Dutch government is looking at ways to financially assist with funds from the Regional Envelope to help pay for the harbour project.

Sizable steps are being taken in St. Eustatius, where the Dutch government has taken over since February this year. The reconstruction of damaged homes should be completed by August, while a large number of car wrecks are being removed. Knops said he was under the impression that St. Eustatius was prepared for this hurricane season.

Telecommunication
Several Members of Parliament (MPs) brought up the issue of telecommunication and accessibility of St. Eustatius and Saba after a hurricane during Thursday’s general debate. Grapperhaus announced in a letter earlier this week that an investment would be made for a satellite installation in St. Eustatius and Saba that the local authorities could use for emergency purposes when the regular means of communication had been cut off.

MPs Nevin Özütok of the green left party GroenLinks, Foort van Oosten of the liberal democratic VVD party and Antje Diertens of the democratic party D66 wanted to know whether the investment in the satellite installation would prevent a cutting-off of the islands as happened after Hurricane Irma due to the damaged telecommunications in St. Maarten.

“How robust is this system? The hurricane has shown that the telecommunications on the two smaller islands function reasonably under normal circumstances, but certainly not when a big natural disaster hits,” said Van Oosten.

Grapperhaus assured that with the satellite installation a sizeable emergency facility for acute situations would become available for Saba and Statia, which also makes the islands less dependent on St. Maarten. He said sufficient coverage had now also been realised with the acquiring of new mobile phones for police.

He announced that a report would be forthcoming very soon about the crisis management on Statia and Saba in connection with the 2017 hurricanes. The Second Chamber asked Grapperhaus to provide the results of an evaluation of the investments in telecommunication on the two islands after the hurricane season.

Domestic violence
MP Özütok mentioned another area of the minister’s political responsibility: domestic violence and child abuse in the Caribbean Netherlands. She referred to this issue as a “multi-headed monster” that required a structural, integral and multi-disciplinary approach. She said tackling poverty and addressing the income aspect was important as well, as this related to domestic violence and child abuse. “Poverty causes a lot of stress. It is important that the minister also has attention for that aspect,” she said.

Grapperhaus agreed that this was indeed a very important issue. He said that during his visit to Saba and Statia early May, he had a long conversation with authorities and stakeholders on this matter. He said the report of the Dutch Children’s Ombudsman had also confirmed that there were very bad situations on the islands where it concerned child abuse and domestic violence.
He mentioned the poverty situation in Saba. “The island looks very picturesque from the outside, but behind the doors of people’s homes there are great problems. Often, many persons reside in one house. It is a small community. A solution for this issue demands cooperation with all stakeholders and a tailor-made approach per island,” he said.

The Ministry of Justice and Security has set up a pilot project to improve the cooperation within the justice system to tackle domestic violence on the three public entities. Grapperhaus said one of the problems was the lack of connection between the partners in the justice system. He mentioned a workshop that was held in St. Eustatius last week where domestic violence and child abuse was the central theme.

Corruption
Corruption and the quality of the government administration on the three islands also came up during Thursday’s meeting. Knops said Saba was doing very well with a small team while facing big challenges.

Responding to questions by MP Van Oosten who urged intervention in Bonaire if indeed large-scale corruption was taking place there, Knops said it was important to discuss this matter thoroughly with the local government and to urge them to take action against corruption and bad governance. He made clear that intervention was certainly not his first choice and only an option if all other means had been exhausted. “Bonaire is not the same as St. Eustatius,” he said.

Checks and balances are pivotal in government procedures to prevent corruption, but it starts with the notion of the local government representatives that corruption is unacceptable, he said.

Grapperhaus added his two cents. He emphasised the importance of prevention and active tackling of corruption, “a policy of tackling of corrupt genes, persons and the structures within which they work. That is very far from administrative intervention. There is a role for me as minister to combat subversive activities.”