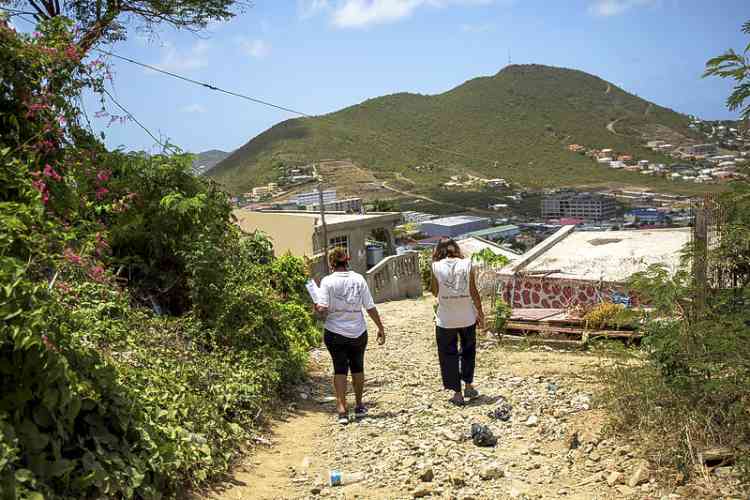 Red Cross teams have been going through various districts on the island for months, interviewing people who registered for help with home repairs and providing materials and sometimes builders to those who qualified. (Dirk-Jan Visser photo).

Red Cross trained and hired 67 men and women to work in the construction of homes and deployed them to repair the homes of the most vulnerable beneficiaries for free. (Dirk-Jan Visser photo).

SIMPSON BAY–Hurricane Irma wrecked lives and livelihoods when it swept through the Caribbean in September 2017, hitting St. Maarten among many others. Now, two years later, the St. Maarten Red Cross and the Netherlands Red Cross continue the recovery efforts with the goal of empowering people to provide for their families, training them on safe building and sensitising them on disaster risks.

Meanwhile, the St. Maarten Red Cross says it is shifting its focus from homes to jobs and to improved disaster risk awareness and community wellbeing.

Last month, the St. Maarten Red Cross launched Livelihoods, a job programme aimed at putting unemployed people back to work and giving more options to those who work only part-time. Livelihoods will continue for at least one year, said the St. Maarten Red Cross in a press release. Through the job programme, the Red Cross hopes to equip people on the island with skills to make their working lives disaster-proof.

Beneficiaries can learn maintenance, sewing, baking, plumbing and other skills that should allow them to be more employable and enhance their abilities to provide themselves with income in the event of future disasters.

Red Cross said it is also providing an alternative track for people who want to start or resume small-scale businesses. Red Cross is still visiting companies on the island, meeting with employers and asking about job opportunities and desired skills, the St. Maarten Red Cross said in a press release.

“Assessing the labour market is important for us in order to be able to give our participants those options which are more demanded,” Suarez Jimenez said.

The first classes for Livelihoods registrants are expected to start in the middle of September, the St. Maarten Red Cross said.

It will also be launching a Disaster Risk Reduction Project within the coming months, which will focus on raising awareness about the risks of various hazards that could contribute to disasters. The approach will be unprecedented within the Red Cross’ recovery work so far, but Project Manager Tamas Marki says it will aim for a wide reach.

“It is expected that by the end of the project everybody will be aware of the mechanisms that bring about different hazards and of ways to prepare for them,” Marki said.

Red Cross’ other project – psycho-social support – will focus on training people in caring for the mental wellbeing of their families and communities and on strengthening community participation and inclusion.

In the days after Hurricane Irma, Red Cross volunteers on the island provided relief aid, soon followed by volunteers from Aruba, Curaçao and the Netherlands. The Dutch public raised 18 million euros and donated that money to the Netherlands Red Cross to implement projects.

Red Cross said it has seen many successes in the last two years and has already spent more than 12 million euros of the donated money, mostly in direct aid to people who needed support.

A food voucher programme that gave persons money to buy groceries reached more than 4,000 households, allowing them to choose how to sustain themselves in the months following Hurricane Irma, and injected hundreds of thousands of dollars into the local economy. Through a school meal programme, Red Cross provided meals to hundreds of schoolchildren for several months after the hurricane.

Head of Mission Fanny de Swarte said Red Cross has allied with organisations throughout the island as new projects enter design and development phases and are rolled out. She said Red Cross has hoped to continue improving its services and admits that some of the recovery work has taken longer than expected.

“In the last year, we were able to work more closely together with other organisations to set up projects that hopefully benefit St. Maarten,” De Swarte said. “Our main challenge has been the speed of execution; we hoped that we would be further along.”

However, the Red Cross said it has had numerous successes, including its Home Repair Project, which ends in two months. According to the St. Maarten Red Cross, it has reached more than 1,000 households with home repair aid, providing materials and training in safe building methods. It also provided building support for some who could not afford to pay for the work themselves.

The St. Maarten Red Cross trained 67 men and women in construction and deployed them as a repair team for the most vulnerable people who applied for help, providing meaningful skills and employment to workers and support to people who needed more than just materials to have safe houses.

Red Cross said it had already finished more than 400 home repairs by the start of August, and the construction teams had fixed more than 100 roofs. Home Repair Project Interim Manager Esmeralda van den Bout said the Red Cross was happy with the overall successes of the programme, particularly in reaching people who struggled to provide themselves with adequate shelter.

“Families living in poorly-built houses, who never had the opportunity to improve their houses, were able, with the support of NLRC [the Netherlands Red Cross – Ed.], to repair their houses, resulting in much stronger structures than before,” Van den Bout said, acknowledging that some work remains, particularly for people who did not qualify for, or could not be helped by, the programme.

New projects will be launched in the upcoming year that will provide services to St. Maarten after the recovery projects have ended, the Red Cross said.

“We have learned valuable lessons on how to better cooperate with communities,” said Mitchell Horsford, the new branch manager. “Furthermore, Red Cross St. Maarten and the Netherlands Red Cross will continue to build local capacities to support regional and local communities and institutions during disaster preparedness and response initiatives.”