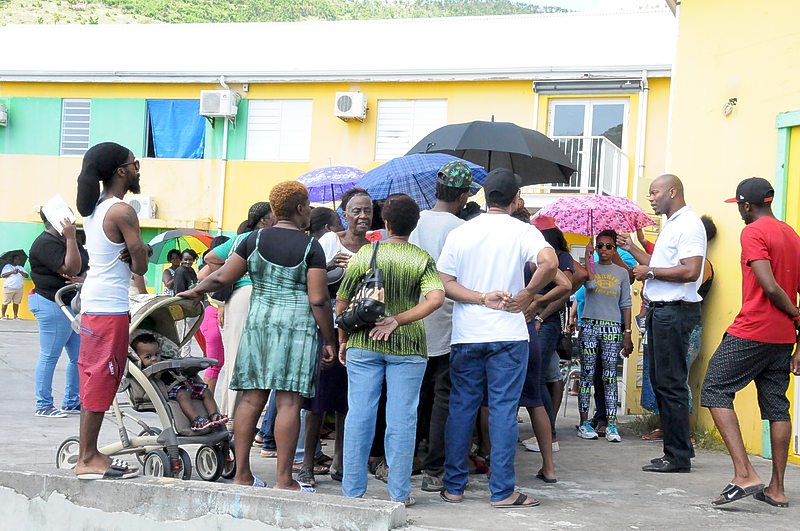 ST. PETERS–The Red Cross might do a second round of its country-wide food voucher relief programme if its resources permit, Netherlands Red Cross Communications Delegate Kathy Mueller said on Tuesday.

Mueller’s comments came after a crowd of residents flocked to Rupert I. Maynard Youth Community Centre in St. Peters on Tuesday hoping to obtain tickets with which they can obtain food vouchers, only to be told there were no more tickets.

One resident said he had been told to show up at the Centre to collect a ticket to obtain food vouchers, but when he showed up he was told there were no more tickets and that more tickets would be given next year.

Another resident questioned how many tickets had been given out in St. Peters, as this is one of the most populated districts in the country. A resident said he would have preferred if the Red Cross had divided the St. Peters district into four sections and had given out tickets to residents in each section at different times.

He was critical of how the programme had been coordinated and said it was not organised well, noting that he had been unaware of it and only “a certain few” had obtained tickets for food vouchers. He claimed that many persons in the district who were jobless, roofless and had children had not received tickets, although they needed them.

“Today there are a lot of families going home with no food,” he said.

In an invited comment, Mueller said the Red Cross gives out a certain number of tickets per district. “We are working with the Community Council in each district and they are responsible for identifying eligible families [who are in need – Ed.] and distributing the tickets to those in their communities,” she said noting that tickets, which can be used to obtain food vouchers, had been distributed in advance of Red Cross visiting the district to distribute vouchers. Only persons with tickets can obtain food vouchers.

She said a total of 500 tickets had been distributed in St. Peters. “We verify the families to make sure that they are in fact eligible and meet our criteria and we do the distribution of the food vouchers, which is happening today [Tuesday – Ed.].

“The distributions are happening every single day, so we have no time to stop and do a second assessment. Once we get through the end of November, we can do a reassessment and see who was missed and see what our financial resources allow us to do, and potentially do a second round of distribution.”

Mueller said she can understand the residents’ frustration, but noted that a process had been put in place and the Red Cross is working with Community Councils. “So, if families were not identified in first round, we will do a reassessment and try to get them on the list on the second round.”

She said also that the Red Cross is not the only organisation involved in relief efforts to assist residents in the country and there are also other avenues that residents can pursue for relief.