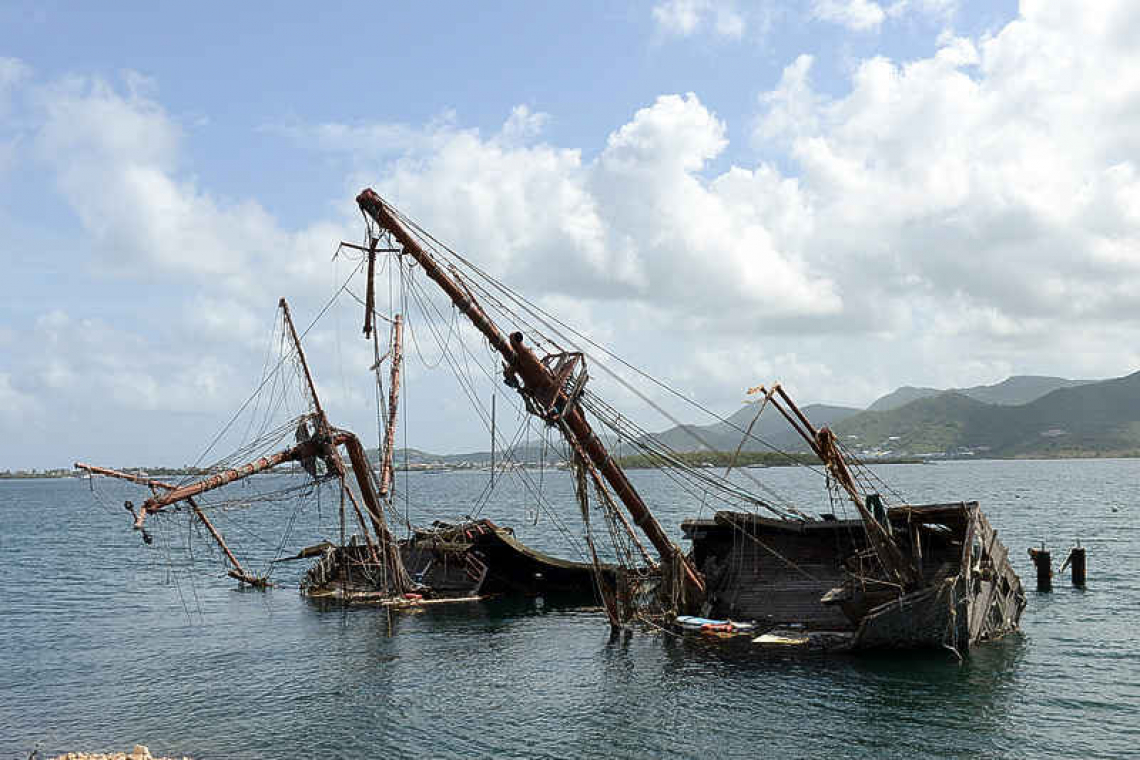 SIMPSON BAY–The National Recovery Programme Bureau (NRPB) and the government of St. Maarten are not obligated to return a pirate’s ship and a tugboat to their owners, the judge in the Court of First Instance ruled in summary proceedings on Friday, June 4.

On April 22, 2021, Seacure Marine N.V. and its managing director Stephen Coetzer filed a petition with the court in which they called upon the judge to order government and NRPB to return the Princess Maya and Marion to their rightful owners and to forbid them to destroy the vessels.

On March 12, 2019, the minister of Public Housing, Spatial Planning, Environment and Infrastructure VROMI published a national ordinance in the National Gazette in which it was announced that owners of the “remaining vessels” in Simpson Bay Lagoon that were shipwrecked by Hurricanes Irma and Maria in September 2017 were given a six-week period to remove their vessels in an environmentally-friendly way.

“After this period, all owners forfeit their legal rights to their vessels and the Minister of VROMI will initiate a procure procedure to have all listed remaining shipwrecks removed,” was stated in the announcement.

Seacure Marine claimed that it had informed government on time that it held ownership over the two contested ships. Seacure also claimed that an NRPB employee had promised that the vessels would be left undisturbed.

According to Seacure, NRPB and the government are acting against the law by removing and destroying the ships. Also, no administrative coercion had been announced. Government and NRPB should have investigated who the owners of the ships were and notified them to remove these, claimed Seacure, through its lawyer Lucas Berman.

NRPB and the government, represented in these proceedings by attorneys-at-law Richard Gibson Jr. and Tom Peeters, contested Seacure’s claim and requested the court to order Seacure to reimburse the cost involved – with removal of the Marion and Princess Maya – and to make sure the wrecks will be removed and destroyed, or face penalties. The costs involved with the removal of the two wrecks were estimated at US $500,000.

The court established that based on Articles 8 and 9 of the National Ordinance the minister of VROMI is authorised to clear shipwrecks after the date mentioned in the public announcement. Therefore, NRPB and the “wreck remover” have the authority to remove and destroy the wrecks, the judge said.

“Following the published notice, Seacure did not clear the wrecks within the six-week deadline, although Seacure promised to do so in its email of April 8, 2019,” the judge said in the verdict.

Seacure’s claims that Simpson Bay Lagoon Authority Corporation (SLAC), not the VROMI minister, would hold authority over the lagoon, were dismissed, as the lagoon has an open connection with the ocean.

Furthermore, the judge observed that there is a distinction between wrecks and vessels. The wrecks of the Marion and Princess Maya “cannot change colour”. They were wrecks at the time of the March 12 notification, even if – in violation of the ordinance – they were made “floating”, the court stated.

Seacure has failed to clear the wrecks itself, which means that the VROMI minister has the right to clear and destroy the wrecks. The claim that the ships or wrecks must not be damaged or destroyed is incorrect, according to the judge.

As the court considered it unlikely that the judge in the main case will honour Seacure’s claim for the return of the Marion and/or the Princess Maya, Seacure’s claims were all rejected.

“More than three years after Hurricane Irma Simpson Bay Lagoon is finally cleaned up and made presentable. Owners of shipwrecks had sufficient time to contribute to the clean-up.” Seacure had wasted this opportunity and can no longer justifiably complain about actions by the government or NRPB, the judge said. As the unsuccessful party, Seacure was ordered to pay the costs of this lawsuit in the amount of NAf. 1,500.