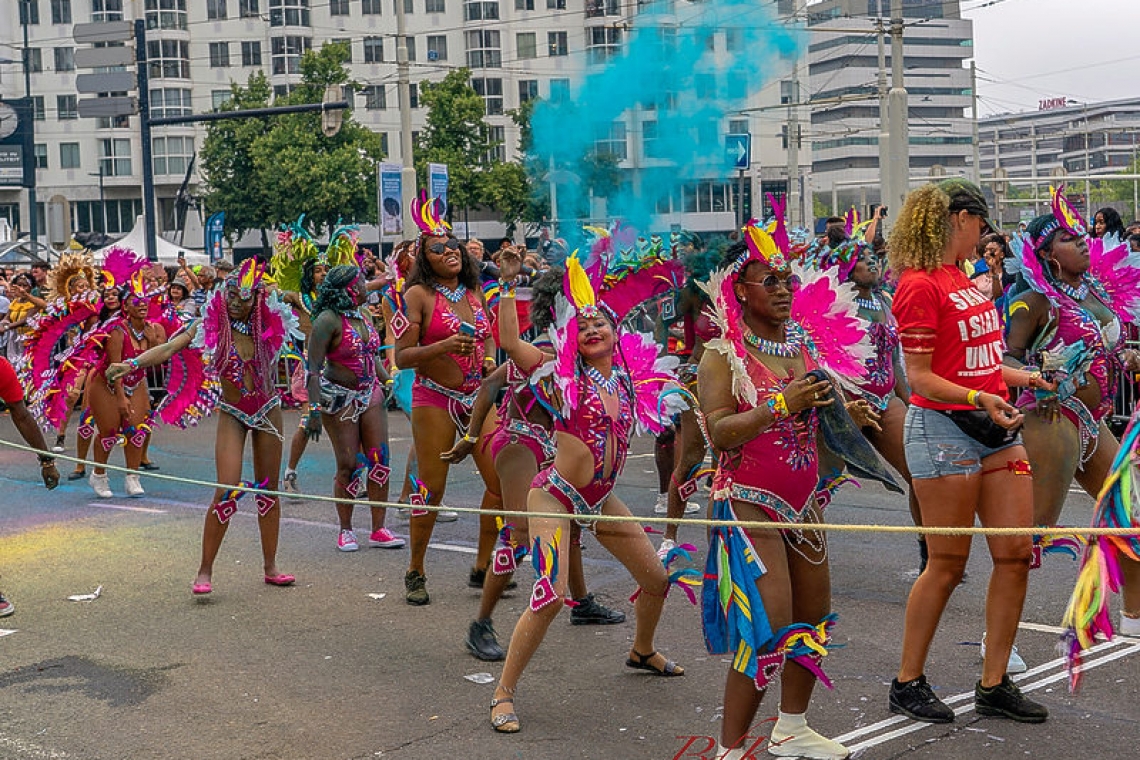 Small Island Unity (S.I.U.) in the 2019 Rotterdam Summer Carnival parade in July last year. Some 120 revellers, many from the Windward Islands, participated, their costumes revealing the “Colours of the Wind” theme. (Bas de Kemp Photography)

ROTTERDAM–After non-stop representation at the Rotterdam Summer Carnival since 2012, Small Island Unity (“S.I.U.”), a foundation geared towards people of Windward Islands descent residing in the Netherlands, will not be participating in this year’s parade in the second largest Dutch city.

This was not a decision that was taken lightly, S.I.U. Director Kyle “DJ SPY” Brown told The Daily Herald. The reason for not participating has to do with the decision of the organisers, Rotterdam Unlimited, to cut short this year’s Carnival Parade route and to remove the main stage.

Rotterdam Unlimited announced last week that this year’s events will for one time be “realised in a modest format.” The main reason is the major renovation taking place in the parts of the city centre where most of the event grounds and the parade’s route are located, including Hofplein, Coolsingel and Schiedamsedijk.

As such, it was decided to have an adapted version of the four-day festival with focus on the Summer Carnival Parade on July 25. There will be no open-air podiums, no festival market, no catering facilities on Coolsingel, and the highly popular Battle of the Drums competition will not take place either. Instead, there will be a live programme in De Doelen stadium and at and around Rotterdam Central Station.

The shortening of the Carnival Parade route from 5 kilometres (km) to 3km, the removal of the main stage with the subsequent cancellation of a number of (international) performers and the Battle of the Drums, were reason enough for Brown and the S.I.U. to stay away from Rotterdam this year.

This would have been S.I.U.’s eighth time in the Rotterdam Summer Carnival. S.I.U. participated for seven years, and it has been quite a ride. What started out as a small, modest group has grown considerably in size over the past years and has matured into a full-fledged carnival troupe with more than 100 revellers, captivating the tens of thousands of spectators.

Instead of the Rotterdam Summer Carnival, the S.I.U. will focus on some 12 events that the foundation is organising or taking part in this year. Two are the Carnival in Notting Hill, London, late August, and the St. Maarten Carnival late April.

S.I.U. has started a Kids Club especially for the children of former St. Maarten students and young professionals who remained in the Netherlands after their studies. The Kids Club with 15 children between the ages 5 and 13 will visit the Cabinet of the St. Maarten Minister Plenipotentiary in The Hague next week Friday.

For the Kids Club events, S.I.U. works closely together with a foundation in the Netherlands, Thuis op Straat (TOS), which organises after-school activities. One of the activities of the S.I.U. Kids Club will be their Easter egg hunt in Rotterdam on April 10 with 100 to 150 children. Also organised this year will be a kids’ karaoke event, a back to school event and an event where children will learn to build their own house and bed to sleep in for the night.

For the grown-ups/young adults, S.I.U. will organise a Caribbean prom night in June/July, a Caribbean awards show in December where people from the Windward Islands will be recognised for their special contribution or talents, and a Boxing Day event.

www.smallislandunity.com was recently revamped. The foundation is also building a YouTube channel, partly sponsored by Google. “So even though there will be no Rotterdam Summer Carnival for us this year, there will be plenty events to enjoy,” said Brown.

S.I.U. aims to be a core platform for cultural exchanges, expressing each island’s unique culture through the participation in cultural events in the Netherlands. “We have grown over the years, not only as a carnival troupe, but also as a positive establishment for the Windward Islands,” said Brown.