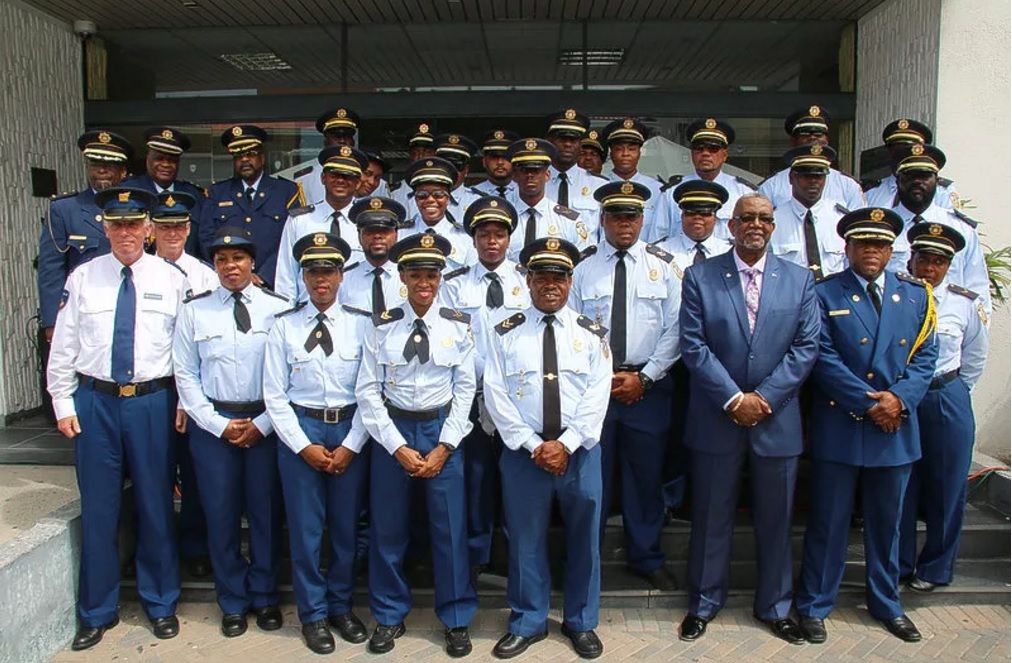 PHILIPSBURG–The St. Maarten Police Force celebrated six years of existence since it was established on October 10, 2010. The Force was part of the Netherlands Antilles prior to the constitution change on 10-10-10. “Police Day” is a day of reflection for the organisation to look back at what has been achieved for the Force in such a short time.

The ceremony saw Justice system dignitaries paying their respects to the young organisation on Monday morning in front of the police headquarters in Philipsburg. Outgoing Minister of Justice Edson Kirindongo congratulated the Force for making strides over the years and wished it many more years to come.

Good News Baptist Church Pastor Roderick Webster gave an uplifting message to the police officers about their calling and serving the community.

Police also took the opportunity to announce the commencement of the Basic Police Training (Basis Politie Opleiding (BPO)) whereby 24 cadets will be given the essential police beginners training to become full-fledged police officers. The programme will take two years to complete with several weeks of theoretical training followed by practical on-the-job training.

Minister Kirindongo in his address highlighted some of the achievements made by police and his Ministry in eight months. “With all those watchdogs, plans of approach, development commissions, no funds, eight months long, every week, personally or via phone, Chief of Police Carl John and I planned how to get things done,” he said.

The accomplishments include finalising function book; training and building a K-9 unit; new special phones for police; building a Special Victims Unit; building a shooting range and Forensic Institute; a surveillance camera project for safety in Philipsburg; insurance for the men and women in blue; more than 250 National Decrees signed for officers restructuring their salaries; bringing in support for the Detective Department; signing a memorandum of understanding with the USA for additional cooperation with the Police Force; re-enforcement of the Arrest Team; and the beginning of the Police Training Programme.

Kirindongo said during his address, “In a short period of time, the conclusion of the Commission for the Development of the Plans of Approach was: they don’t see any development in the Police Force of St. Maarten.

“This is probably the last time I address you as the Minister of Justice. If you want to stay in a country with a respectful Police Force, stop kicking against your leaders, be honest in your job, stay away from people who can bring you down when they fall and let integrity guide you in your morning prayer.

“To the cadets beginning the BPO Programme, success and make the best of it.

“Carl John, It was a pleasure working with you and your management team. I hear all over that I gave the police everything they ask for. It was not what they ask for. The professional way of asking didn’t give me any reason to say no to their requests.”

He also thanked the unions with which he had dealt while in office and ended by saying, “Carl John, I have some encouraging sentences for you. You face a nice challenge. Maybe you have a long way to go before you reach your dream Police Force. I encourage you in this dream. Don’t give up; a watched pot, never boils. I know you, your support team and the rest of the Police Force can give St. Maarten the police St. Maarten deserves. Keep in mind, that you cannot make an omelette without breaking some eggs.”

Police Training Programme Coordinator Rob Appelhof was happy with the realisation of the dream he had alongside Police Chief John in 2015 to get a police training programme going again.

“Together we made it, and it is in that spirit we continue to work together to get the class going with these students we have now. Together we can soon get this class graduated and together the existing officers will work double while these officers are furthering their studies,” said Appelhof.

Chief John thanked Minister Kirindongo for his assistance as Minister. “We as leaders may disappear, but the work what was laid down will not go in vain. Many said that Carl John as Police Chief will not work out, especially with Denise Jacobs as his second in command. Well, it has been a year and all is well. We have managed to build an even stronger police management on a wide scale,” John said.

He spoke about what the Force had achieved in such a short time span and said there was much more room for improvement. He thanked the management team for their hard work and dedication and the entire Police Force of St. Maarten for their ongoing commitment to public service.