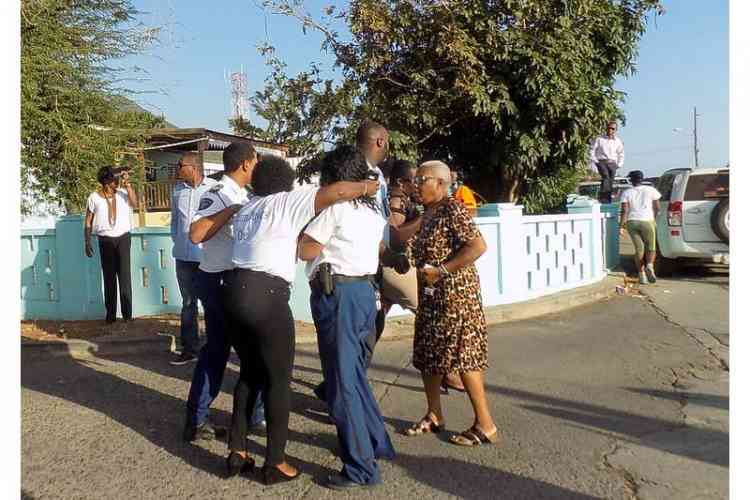 ST. EUSTATIUS–A police patrol of the Basic Police Care on St. Eustatius escorted a funeral possession to Salem cemetery on Tuesday for the funeral of Estelle Berkel. Upon arrival at the cemetery, a fight broke out between two men: D.M. (25) and K.R. (28), during which one of them was stabbed.

Bystanders, who were attending the funeral, intervened and broke up the brawl. The Police arrested K.R. on the scene for stabbing. The victim D.M. was taken to Queen Beatrix Medical Centre, where the physician on duty attended to his wound.

During the brawl innocent bystanders got either hit or pushed. Police Officers on the scene were confronted with an enormous challenge at that moment because the hitting and pushing of bystanders led to chaos as family members and friends of the victims began fighting each other.

Police are calling for the assistance of people who may have information or witnessed the stabbing to come forward and give an account of how the brawl started that led to the stabbing and what exactly transpired. These persons may call the Police Station at tel. 318-2333.

Five witnesses told The Daily Herald they saw K.R. throwing a beer bottle at D.M. during the funeral procession. Some of them said they had to move quickly to avoid being struck by the flying projectile.

One innocent bystander fell to the ground and got hurt. The woman hit her head and injured her shoulder. She had to be taken to the Medical Centre for treatment. This enraged a family member which escalated the brawl.

Police Officers came running to the scene from various directions, some of them in plain clothes as they were attending the funeral. The stabbing victim, however, had already left the scene with blood stains on the back of his shirt as he walked up Sandy Road.

The brawl and stabbing enraged the public and family members of the deceased. The son of the deceased was heard screaming, “How dare you disrespect my mother’s funeral by coming to fight.”

A large crowd gathered outside the Medical Centre, which the Police dispersed as it became loud. Vehicles could not pass the streets in front or behind the Centre and had to make detours to be able to get to their destination for some time.

The altercation was not the first run-in between the two men. They also had an altercation during the Saba Day 2017 celebrations on the sister island.

The Police stated Thursday that in situations where the safety of the public is concerned, and the Police give an order to vacate the area, those receiving the order to vacate are legally obligated to give immediately adherence to the orders of the Police.

Failure to comply may lead to the arrest and prosecution of individuals not adhering to the orders given. This authority is derived from the Island Ordinance Promotion Public Order and Community Protection 1993.