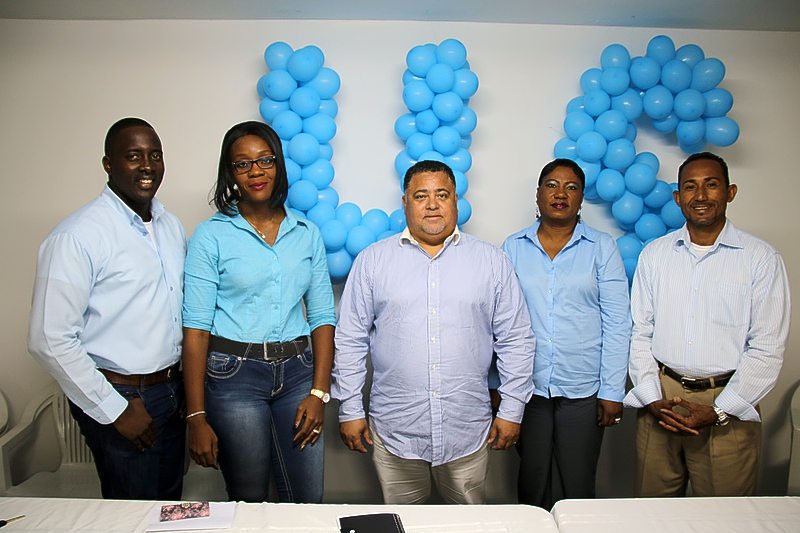 PHILIPSBURG–The United St. Maarten Party (US Party) continued its launch campaign and rolled out another four candidates who will be on its list come September 26. Party leader Frans Richardson introduced Delphine Agnes Brooks Mardenborough, Franklin de Windt, Jelen Coulanges and Lyndon Lewis to members of the media at the party’s headquarters.

Mardenborough was born on the island and grew up in the district of South Reward. She is certified by worldwide organisation Weddings Beautiful as an events and wedding planner and has certificates in decoration and coordination of events.

De Windt is a taxi driver and casino dealer and has been on the island for the past 25 years. “Given the situation that we are seeing in St. Maarten, on so many different fronts, I have decided to run in this Parliamentary election to contribute to the development for a better future for St. Maarten.

“I have chosen the US Party because this party exudes togetherness, family and keeping the St. Maarten people as the priority in governing. This appeals to me, as I have made St. Maarten my home, I love this country, it has been great to me and my family and now it’s time for me to give back,” he said during his introduction.

Coulanges attended Leonald Conner Primary School, Sundial School and Milton Peters College, where she majored in Administration. “One of my visions for this country is to create a large group of entrepreneurs, giving them the platform to excel in their chosen industry. This is not a promise, but giving them the opportunity to do great things for themselves and their family to be able to take care of their everyday needs in life,” Coulanges stated.

Lewis was born December 2, 1986, to French and Dutch citizens of the island. He maintains a firm grasp of both French and Dutch laws. It was a mixture of his dedicated nature and a desire to serve a higher purpose that led him to pursue a career in law enforcement.

He was sworn in as an Immigration officer in 2007 and the process of becoming a full-fledged police officer began the following year. Lewis attained the rank of Basic Police Officer in 2010 and later that year received his first promotion as St. Maarten’s youngest Police Sergeant.

He advanced to the General Detective Department in 2012 and continued his rise in law enforcement to become the island’s youngest Police Major, a specialised detective in juvenile and vice cases. He was promoted to Federal Detective in 2014.

Lewis has now moved on to other service-oriented endeavours, defending the rights of the people within the Justice system as ABVO union representative. He also spends much of his time representing people in the Civil Court and, although self-taught in this scope of the law, has not lost a case yet.

Party leader Richardson said they would release their manifesto soon and the idea behind the information launch campaign is for the public to know who is running with the party prior to Postulation Day.
Source: Daily Herald
US Party rolls out more candidates