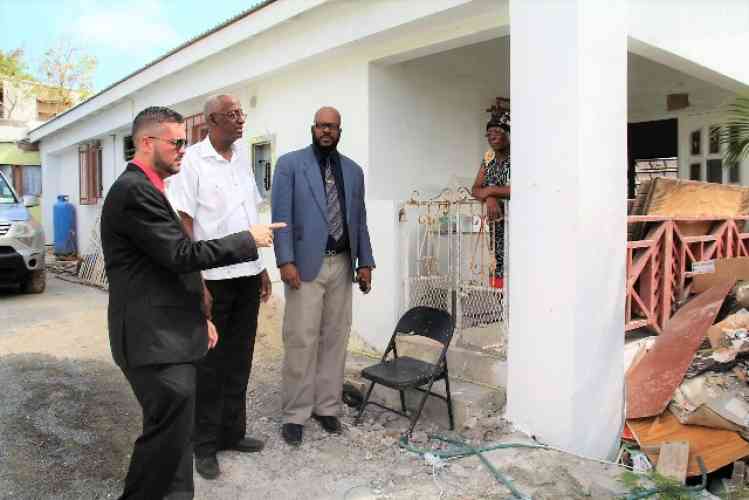 Cape Bay, Sint Maarten — The Cay Bay resident who was recently featured in an online publication with alleged grievances and dissatisfaction over the SXM Development Fund and the Government’s handling of her home repair said she never complained about the work done to improve her home.

“I am worried that I cannot do the rest of the things I want to do because I am a widower and not working and I live on a pension,” she said on Wednesday. Despite the enormous effort by the Fund to repair her home, Ms Van Putten still has some work that needs doing, which are well outside the scope of the work that the Fund caters for.

She said as much to Minister of Tourism, Economic Affairs, Transport & Telecommunications TEATT the honourable Stuart Johnson and the Minister of Public Housing, Physical Planning, Environment and Infrastructure the honourable Miklos Giterson who visited her home on Wednesday afternoon.

She told the ministers “I was always happy with what is done. I just can’t finish it myself.” The complaint levied through the website also sparked interest from the Director of the SXM Housing Development Fund Keith Franka, who visited the site to inspect the work done the day before with both Ministers. Franka told the Ministers he was very familiar with the property, as they had practically taken the house, which was in deplorable condition and started repairing it in June 2017 well before the devastating hurricanes of September that year. He said the state of the residence had concerned the Fund to the point that they requested that the Contractor perform additional work such as building massive concrete pillars additional to the roof repair and repairs of the main structure including windows and doors.

Minister Johnson learnt of the matter and he along with colleague minister Giterson decided it was important to get first-hand information on the actual situation the elderly resident was facing. They contacted the relevant individuals and arranged to visit the property for a site inspection.

On Wednesday, Ministers Johnson and Giterson also brought the Contractor Jared Construction to the site and requested an update, which the company’s representative Mr Dollison happily provided. He told both ministers that when the request to repair this specific building owned by Ms Van Putten came to their attention, they were confronted with three separate bids, which were “miles apart.” “When I saw that the house was in such a bad state, I went to speak to the owner, and she actually expressed an interest in getting rafters. I told her the condition of the building wouldn’t support rafters, and we had to build ring beams and columns around the entire house to support the structure,” explained Dollison.

He said the property owner also wanted a partition to separate a room which they couldn’t do based on the condition of the foundation at the time and they told her the six-inch blocks she intended to use was not a wise or safe idea.

The Contractor said while working on the building, they noticed that a poorly constructed room was attached at the back of the building with exposed steel, and it appeared to be unstable.

“We broke it down and rebuilt the roof with concrete as we thought it would be a good safe room in the event of a hurricane, and the owner wanted to shelter if the galvanize roof was damaged,” said Dollison. Another side room was spotted with a galvanized roof held together with old nails. The Contractor repaired that roof using screws to increase its strength at no additional cost. The owner wanted to have the roof sheets varnished, but the SXM Housing Development Fund could not comply because of the high additional costs that would be incurred and the time constraints.

What they did do though at the stated wish of the owner was prepare the structure so that she could eventually construct a second floor above. The extra work that was done, including building kitchen cupboards were completed in the interest of helping the homeowner, but the Contractor simply could not make the cabinets she requested.

Despite the negative comments made via the online website, she told both Ministers, “I am happy I’m on the list, and they will help me some more.” She said, “I am glad that the ministers came and see what had to be done, and I have Mr Franker’s phone number to talk to him.” The intention based on discussions with the Ministers, the Contractor and the Fund, is to keep Ms Van Putten on the list and provide her with additional assistance once more funds become available.