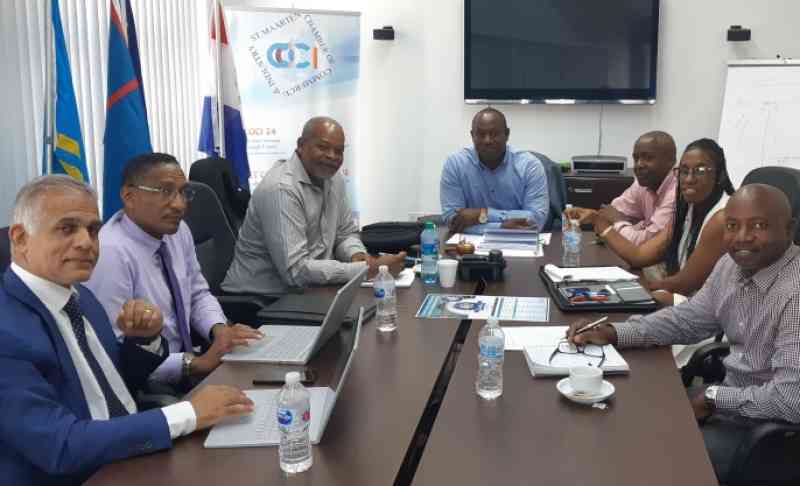 SINT MAARTEN, PHILIPSBURG – On Monday the 19th of August the St. Maarten Chamber of Commerce Executive Board and Director met with the Honorable Minister of Justice Mr. Cornelius De Weever and his team of Legal advisers.

The meeting was based on an invite sent to the Minister from the President of the Board Benjamin Ortega with respect to recommendations for law changes from the Caribbean Financial Action Task Force (CFATF), an organization of states and territories of the Caribbean Basin which have agreed to implement common counter-measures against money laundering and terrorism financing.

In its letter sent to the Minister of Justice, COCI expressed their concerns with the recently proposed draft law and in particular the articles of the law related to the functioning of the Chamber of Commerce and Industry.

The Chamber representatives, the Minister and his legal advisers expressed the gratitude of coming together to share their input in finding the best solution to solve some of the country’s challenges through this proposed draft law.

Agreements have been made that both legal advisers of the Minister and the Chamber would address further amendments after a full review and recommendations.

COCI informed the Minister and his team that the Chamber is conducting a legal review on the proposed changes.

From the initial review that the Chamber executed and within this contact with counterparts, the Curacao Chamber of Commerce, we noted that certain articles, such as Article 25. 1,c was noticeably different from the same draft law changes executed in Curacao.

The proposed amendments were executed without any clear knowledge of the Chamber of Commerce & Industry, its functioning and its obligations to maintain the registry of businesses, as well as its tasks to support and propel business development, President Ortega expressed during the meeting with Minister De Weever.

The Chamber of Commerce and Industry in its communication to Government two years ago broached the topic of compliance with Anti-Money Laundering (AML) standards and its vision of how the Chamber could aid herein.

Recently the Chamber met with Minister or Tourism, Economic Affairs, Transport & Telecommunications (TEATT) Hon. Stuart Johnson, and agreements were made to propose amendments to the various ordinances governing COCI.

These changes and the intention thereof include the amendments of article 25 of the Book 2 of the Civil Code. Such changes were already adapted in Curacao and have been communicated through the relationship between St. Maarten and Curacao Chambers, Ortega disclosed.

The Minister and his team explained in detail the trajectory of the law amendments and the process it took, dating from 2014, to come to the proposed draft legislation. The Legal adviser of the Minister further expressed that there was a joint task force of the former Netherlands Antilles that worked on many of the law amendments and it was within this that changes were made and further adapted for the individual islands.

The Chamber also expressed the concerns that in a quest to comply with international standards, the wrong mechanisms can be chosen, and the impact this would have on the economy, the development and sustainability of Sint Maarten. At no time should legislation be adopted which puts at risk what it is supposed to enhance, Ortega explained.

The Chamber of Commerce President Benjamin Ortega, through this medium would like to press on Parliament and Government to carefully deliberate on the proposed amendment and to consider at all times the impact any such amendment would have on the social, economic and sustainable development of Sint Maarten.