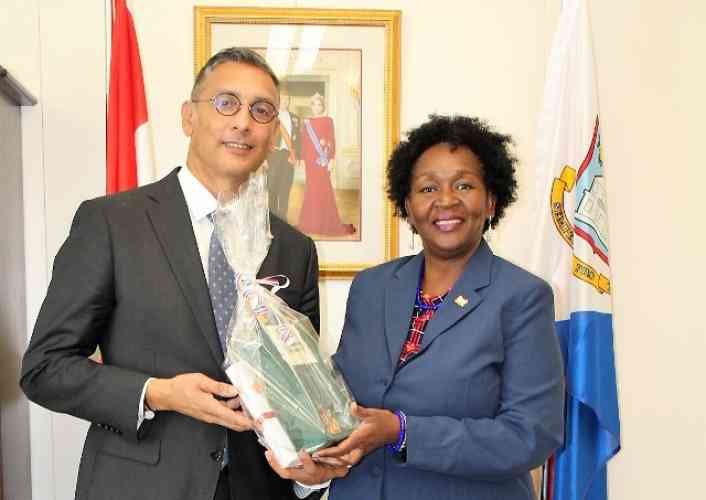 PHILIPSBURG—The relationship between the Caribbean Netherlands and Suriname is her main focus and on Monday Consul General of the Republic of Suriname in Curacao Ms Agnes Daniel visited the island and held a very fruitful discussion with Finance Minister the Honourable Perry Geerlings.

The Consul Daniel is on her first official visit to St. Maarten and is scheduled to meet with Governor of St. Maarten His Excellency Eugene Holiday. She will be present her credentials to the governor for inspection and is looking forward to a fruitful dialogue with him on various topics of possible collaboration between Suriname and St. Maarten.

During her courtesy visit with Minister Geerlings, the two spoke briefly about her role as Consul General. She is presently stationed in Curacao and has as her government’s primary objective, establishing a closer working relationship with the six Dutch Caribbean Islands. As a consul general, she hopes to develop the kind of cooperation between Suriname and the islands in the area of agriculture, tourism, and entrepreneurship amongst others, that

will have a mutual benefit.

Minister Geerlings presented the Consul General with a welcome gift as a token of his appreciation for her electing to visit him while on her official visit to the island. It is, however, not Daniel’s first visit to the island. The former Police Chief Commissioner, now Consul General has visited the island on two occasions as a tourist. Daniel expressed her love for the “beautiful island.” She said while here in her official capacity she has already seen some opportunities for Suriname and St. Maarten to collaborate to the benefit of the islands.

Daniel expressed her pleasure to have been received by Minister Geerlings and said it was “certainly an honour to visit the island and to meet with the various ministries and for them to allow her to discuss with them the ideas her government has for collaborative efforts to take place between the countries.”