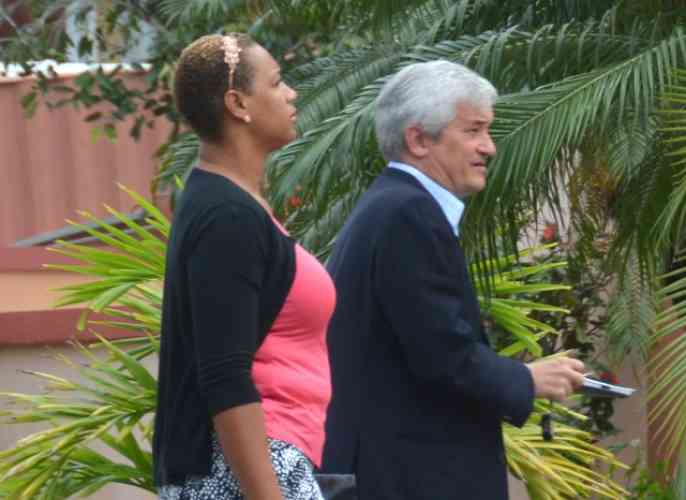 BELAIR — Former politician Theodore Heyliger denied Tuesday, during the second day of hearings in the Larimar investigation, that he had been the great racketeer in this case involving corruption, money-laundering and bribery.

Heyliger is accused of receiving payments from big construction companies of in total approximately US $4 million over a period of 15 years while holding public office as an island council member, commissioner and as a minister.

Heyliger stands trial for receiving monetary gifts in the period 2004 to 2019. Under the first charge, over the period of January 1, 2004, to March 31, 2019 Heyliger allegedly received from construction company Windward Roads BV (WWR), Central Concrete Mix BV, Dutch consultant and co-suspect R.M. and his company Advanced Consultech SA and/or J. Jones almost US $1.85 million in cash, a money transfer of $40,000, a credit line and/or waiving of open invoices for Caribbean International Maritime Co. NV, Sint Maarten Shipping & Stevedoring NV and/or Nichirei Carib Co. NV to the tune of NAf. 900,000, a Dodge Charger worth nearly $200,000 and repairs done to his private home to the tune of NAf. 135,292.

In exchange for these payments, Heyliger is suspected of having used his influence to facilitate the awarding of one or more public works contracts to WWR in return.

Heyliger is also charged with having received over the period April 1, 2009, to October 1, 2011, from dredging company Devcon TCI Ltd., consultant R.M. or his company Caribbean Advice and Consultancy (CAC) Ltd. some $700,000 in cash ($82,468), money transfer ($260,000) and (piece of) a parcel of real estate in Upper Prince’s Quarter referred to as the “Mullen property.” All this to facilitate the awarding of dredging work to the amount of $8 million to Devcon.

Under the third charge, Heyliger is suspected of accepting between February 1, 2010, to March 31, 2014, from Volker Construction International BV, Volker Stevin Caribbean NV. R.M. and/or Consultech an amount of $1,065,524. and/or $179,000 to facilitate the awarding of construction project(s) to Volker in connection with the building of the causeway bridge.

The fourth charge has to do with money-laundering by Heyliger allegedly selling the Mullen property and purchasing two plots of land in Oyster Pond. Both R.J.E.’s and G.H.W.P.’s involvement in the Larimar case are related to this charge. Both are suspected of helping facilitate the sale in a less than transparent manner while being aware of its criminal origins.

In the Prosecutor’s Office’s opinion, Heyliger was bribed by consultant R.M. and WWR director J.B. in exchange for which WWR obtained building contracts for government projects. According to B.’s predecessor, Heyliger wanted him out because he was incorruptible. He said WWR was afraid of Heyliger and had failed to stand behind him as company director.

Heyliger said he had had no problem with B.’s predecessor and said the company had to deal at the time with labour unrest and problems with local contractors who required a local counterpart. “B. should be considered a local, as he resided on the island for years,” he said in responding to the allegations.

Heyliger, who was first elected to the Island Council in 1995, told the judge he had never received money from M., “only donations for the political party during election time for posters, T-shirts, advertising and such, but all parties received those. He also made donations to schools, football teams and so on. This could amount to tens of thousands of dollars,” Heyliger explained.

“Listening to M. yesterday, I would have had 400 lunches with him. He was attentive, wanted to be friends with everyone. His job was information, but he did not pay me,” Heyliger stated emphatically.

He also denied he received money from M. when they met at WWR’s office. “The only thing M. gave me were ‘stroopwafels’ [a Dutch wafer cookie with caramel filling – Ed.] when he returned from the Netherlands.”

Heyliger also denied his involvement in the Devcon deal, stating that his only involvement in the dredging project as Commissioner of Tourism, Economic Affairs, Transportation and Telecommunication (TEATT) was the heightening of Great Bay beach with sand and the ring-road project.

He also denied that he was the man in charge at the harbour, as this was in fact the shareholder representative, the governor of St. Maarten. “It’s ridiculous to say that I have power over him. I don’t have that informal power, absolutely not,” he said in response to M.’s statement to this effect.

Heyliger claimed he had not received a penny in the tendering procedure for the $43-million causeway project and said he had never had a discussion with Volker Stevin about money or any contract about the bridge.

“I could not give any information about the causeway to Volker or any other company. The harbour and its board of directors made the decisions, not me,” Heyliger told the judge, adding that when he was not in government, projects in St. Maarten continued under “the other [William] Marlin.”

He admitted that he had been copied on emails, but said that was to keep him abreast of developments pertaining to the causeway project so that he could inform the media and respond to questions.

He also denied any involvement with the Mullen deal which was closed in cooperation with a real-estate broker in Anguilla for $700,000. “I did not own Mullen,” said Heyliger.

The broker had said that a company named Windward Breeze, established by suspect E., had been established to facilitate the sale, but defendant P. said the realtor only made the statement “to clean up his own house.”

However, Heyliger did admit that he had been in frequent contact with the “largest broker on the island.”

In his final word, Heyliger said the Larimar case has had a great impact on his life. “I have no job and my political career is over. It affected everyone I have a relationship with, my family, my children and even my bank,” he told the court. “I’m headline news.”

The prosecutor will formulate the demand against Heyliger and co-defendants B., P. and L. today, Wednesday, after which attorney Eldon “Peppie” Sulvaran will plead on Heyliger’s behalf.