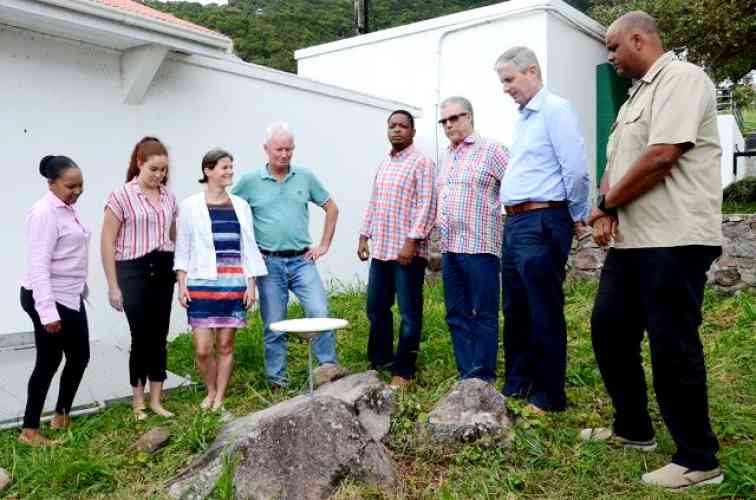 Discussed with volcanologist De Zeeuw-van Dalfsen and seismologist Sleeman was the KNMI work on Saba to monitor seismic and volcanic activity. The main conclusion was that there is no reason for concern.

The KNMI experts were on Saba this week to inspect and service the measuring equipment installed on different parts on the island. The KNMI has seismic equipment at the airport, in St. John’s, Windwardside and The Bottom. Also, at the first two locations, Global Navigation Satellite System (GNSS) instruments are installed. A third GNSS is expected to be installed on the North Coast at a later stage. All instruments transmit the collected data to KNMI in real-time.

No out of the ordinary seismic activity has been measured on Saba that could indicate a change in dormant Mount Scenery volcano. “There is no cause to be worried about the volcano,” De Zeeuw-Van Dalfsen said.

De Zeeuw-Van Dalfsen and Sleeman on Thursday installed a GPS (Global Positioning System) receiver next to the Satel building in The Bottom. The GPS receiver instrument measures its precise location on the ground, allowing to track it if the location is moving. The KNMI experts collected the data of the temperature measuring equipment at the hot spring opposite Green Island on Wednesday. No reason for alarm at the hot springs either assured De Zeeuw-Van Dalfsen. “Everything seems to be very stable. The temperature has been a constant 82 degrees Celsius.”

The Members of the Island Council posed a lot of questions to the KNMI experts. They asked in detail about the measuring and monitoring system, the occurrence of earthquakes in the region, the possibility of volcanic activity and the erosion that affects Saba.

Asked about the recent series of earthquakes near Puerto Rico, the experts explained that the situation in Puerto Rico is special because of its location near a microplate wedged between the North American and the Caribbean tectonic plates.

De Zeeuw-Van Dalfsen and Sleeman said that people on Saba can always reach the KNMI if they have questions or if they want to report feeling a tremor or smelling a volcano-related odor. The information of the GNSS systems and seismometers on Saba, and the region, can be found online on the website www.knmidc.org