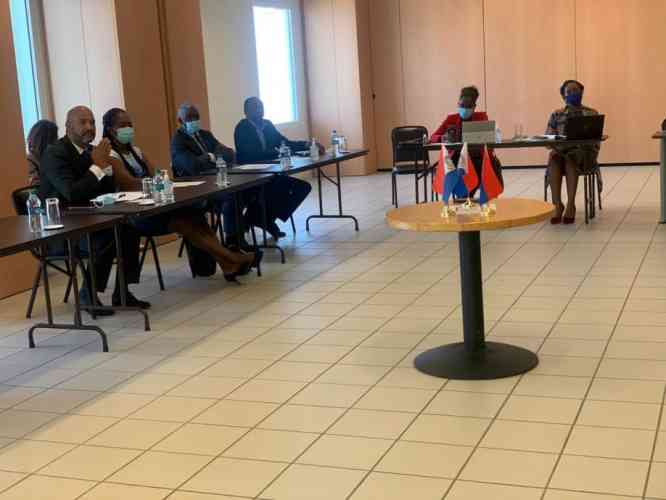 SINT MAARTEN (POND ISLAND) – In a series of meetings held on Friday, July 24th, by technical staff and today, Monday, July 27th, with the Council of Ministers (COM) and its French counterparts, current developments on COVID-19 were discussed, as well as the way forward.

During the first meeting today, with Prime Minister Silveria Jacobs and Madame la Préfète Sylvie Feucher, it was agreed upon by both parties that after further evaluation during this current week, that follow up discussions would take place. Préfète Feucher expressed that she is contemplating re-implementing internal controls to better control the spread of the virus.

Shortly thereafter, the Council of Ministers also met with President Daniel Gibbs and his delegation of Vice Presidents from the Collectivite of Saint Martin to further discuss the COVID-19 developments and exchange updates concerning the increase in active cases on both sides of the island.

Discussed were measures to be taken in line with the health Memorandum of Understanding (MOU), as well as assessing the possibility to further synchronize the measures in place in order to mitigate the further spread of the virus throughout the entire island.

Also discussed, were the collaborative efforts between Collective Prevention Services (CPS) and the Agence Régionale de Sante Occitanie (ARS) to discuss and share the origins of and strategy for contact tracing of new cases on both sides of the island.

The Government of St. Maarten indicated some of the stricter health protocols and mandatory measures put in place, such as social distancing in public places and compulsory use of facial protection in public, as well as a maximum number of patrons in enclosed spaces.

Prime Minister Jacobs also gave updates concerning the Multidisciplinary Taskforce and Enforcement Teams that would continue to monitor, evaluate, and advise the Government on the best practices needed to swiftly crush the spike in cases once more. Mandatory mask usage is also being enforced on French St. Martin as of this week.

Further concerns for the Governments of St. Maarten/St. Martin were related to visitors from St. Barths, which has reopened its borders to visitors originating from the United States. In light of this, the St. Martin representatives indicated that US travelers wishing to visit St. Martin via St. Barths are required to have been in St. Barths for 14-days prior to their scheduled arrival to St. Martin along with a negative COVID-19 PCR test result. St. Maarten has also adjusted its measures to ensure that visitors from St. Barths would also require a negative PCR test and would be monitored as well.

Both parties exchanged COVID-19 statistics, indicating that the cases have resurged via community spread and are committed to continuous dialogue on developments on both sides of St. Maarten. Collaboration between both sides of the island has become more crucial given the free flow of movement on either side.

While President Gibbs expressed grave concern about the reopening of St. Maarten to the US flights in August, the Government of St. Maarten highlighted the preparations being finalized in order to do so in a controlled manner.

These preparations include mandatory PCR testing no older than 72 hours prior to arrival, increased temperature checks, and increased medical personnel at the airport as well as to assist CPS. The Government will also continue to evaluate the health care system’s ability to handle the current outbreak.

The meetings were positive overall. Government officials from both sides of the island pledged to further research and work towards the possibility to rapidly increase testing capacity on both sides through a joint request to access EU COVID-19 funding. Both governments also pledged to meet on a monthly basis and to work towards realizing the goal of a joint congress for St. Martin with representatives from both sides.