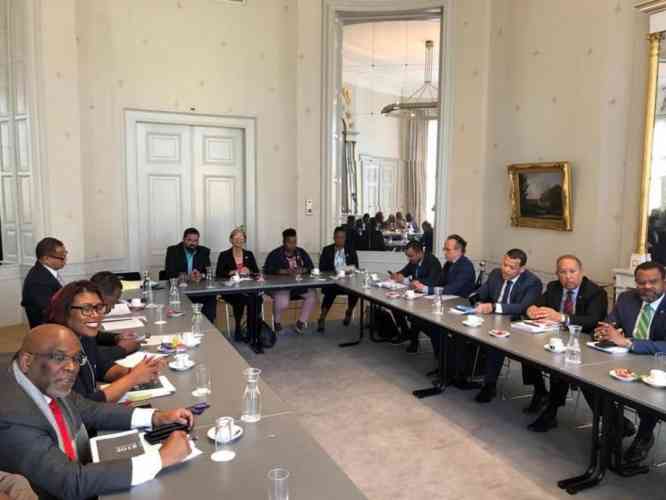 SINT MAARTEN (PHILIPSBURG) – Delegations from the Parliaments of Aruba, Curaçao, and Sint Maarten recently made a working visit to the Netherlands from where they met with Kingdom partners for a series of discussions surrounding the Kingdom Law Disputes regulations.

For these meetings the delegation members were divided into three work groups in which all three countries were represented.

This draft Kingdom Law, which was submitted to the Second Chamber in November 2018, finds its basis in article 12a of the Kingdom Charter. The delegations are of the opinion that the current proposal that is on the table does not live up to the requirements of article 12a of the Kingdom Charter and neither does it live up to the standpoints formulated by the IPKO in 2015, which were also ratified by the Second Chamber via a motion in 2015. The islands would like to see a dispute regulation with an independent body that is able to give a binding judgement on strictly legal disputes based on the Charter of the Kingdom.

On April 15, 2019 Members of the three delegations of the Parliaments of Aruba, Curaçao and Sint Maarten started off their working week with a visit to the Council of State where they met with the representatives of the countries in the Council of State of the Kingdom. This Council has also issued an advice on this proposed law for a Dispute Regulation, as is regulated by law.

The delegations also met with the Vice-Chairman of the Council of State. The topic of the Dispute Regulation was discussed and also the role that the Council of Advice, as an independent institution, could be given within that context.

The last appointment for April 16, 2019 was a meeting with First Chamber Member, Mr. R. Ganzevoort of the GroenLinks on the Dispute Regulation. Mr. Ganzevoort emphasized that the islands would have to prepare to answer questions on the definition of ‘strictly legal disputes’.

On April 17, 2019 the Presidents of the Parliaments of Aruba, Curaçao and Sint Maarten paid a visit to the President of the Second Chamber, Ms. K. Arib. This meeting was followed by a meeting with Mr. R. Jetten, Mr. J. Paternotte and Mrs. A. Diertens of the D66 about the Dispute Regulation. Everyone agreed that it would not benefit anyone to start a dispute about a Dispute Regulation. This regulation should be supported by as many Members as possible.

After the discussion on the situation in Venezuela the delegations continued their planned meetings on the Dispute Regulation. The delegations met with Ms. N. Özütok of the GroenLinks and Mr. H. Krol of the 50PLUS. Both factions were positive about the three standpoints that were formulated in 2015 during the IPKO and ratified by the Second Chamber via the motion Van Laar.

The working visit was continued on Thursday, April 18, with meetings with Mr. R. Bisschop of the SGP, Mr. C. van Dam of the CDA, Mr. A. Bosman of the VVD. The delegations also met with Mr. R. van Raak of the SP who shared his viewpoints on the proposal for a Dispute Regulation and the Charter of the Kingdom. This meeting was then followed by a meeting with Mr. N. Drost of the ChristenUnie.

On Friday, April 19, the delegations of the Parliaments of Aruba, Curaçao and Sint Maarten met with Professor A. van Rijn to exchange ideas on the topic of the Dispute Regulation and the proposal submitted by the Kingdom Government.

The delegations agreed that the general feeling is that the factions that they met with understand the positions of the Parliaments of Aruba, Curacao and Sint Maarten. They are therefore not opposed to the possibility that the islands will propose an amendment to the proposal as submitted by the Kingdom Government. Many parties have expressed an interest to receive more information on the topic and also to receive the amendment before the handling of the law, and perhaps constructively provide feedback. The delegations will stay in close contact with the factions in the Netherlands.