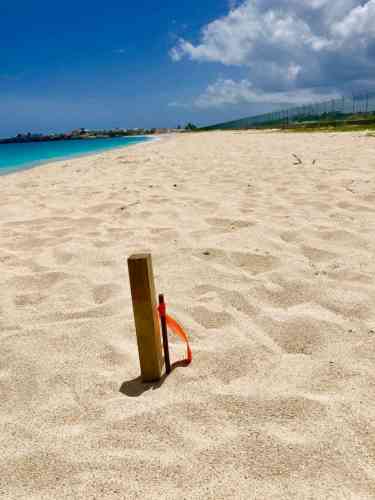 SINT MAARTEN (SIMPSON BAY) – The Sint Maarten Nature Foundation was informed during beach assessments carried out as part of the monitoring of local sea turtle populations during nesting season that the development of a thirty-two room hotel is being planned for the area of Simpson Bay Beach between Karakter Beach Bar and White Sands Beach Club.

The Foundation is very concerned at the rumoured development considering that the area is one of the last undisturbed and undeveloped nesting beaches for all three of the endangered sea turtles that come ashore to lay eggs on Sint Maarten.

“Although we have not yet received confirmation that this project has been approved, we did find stakes used for measuring property all over the beach. This, together with information that has been shared within the community, has caused us to have major concerns about this new proposed development for that section of Simpson Bay Beach.

“If this development were to go ahead it would mean the end of sea turtles coming ashore to nest on Simpson Bay, the most important nesting sea turtle beach on the Dutch Side,” commented Nature Foundation Manager Tadzio Bervoets. The Foundation has been calling for the sustainable use of the country’s beaches and for legislation to be established that would protect local beaches, the island’s most important natural resource.

“We also would like to remind developers and those responsible for issuing permits that based on Articles 16 and 17 of the Nature Conservation Ordinance St. Maarten it is illegal to kill, wound, capture or pick up sea turtles. It is also illegal to directly or indirectly disturb their environment resulting in a physical threat or damage, or to commit other acts which result in disturbance of the animal. It is forbidden to disturb, damage or destroy sea turtle nests, lairs or breeding places, which that section of Simpson Bay Beach is classified as,” explained Bervoets.

The Nature Foundation is the designated focal point for Sea Turtle Conservation according to the Inter American Sea Turtle Convention, the SPAW Protocol on Endangered Species and Country Representative for the Wider Caribbean Sea Turtle Network and has received specialized training in Sea Turtle conservation, including in relocating turtle nests that are in danger due to human activities or natural events such as storm surge. The Foundation has requested clarification on the matter from the VROMI Ministry.

September 26, 2020
0
SINT MAARTEN (POND ISLAND) - As of September 25th, there were nine (9) persons who tested positive for COVID-19; however there was a recovery of fifteen (15) persons; reducing the total active cases to seventy- three (73). The total...
Read more