Home Local News The Boom Went Boom: How a Crazy Day 2 of the Caribbean... 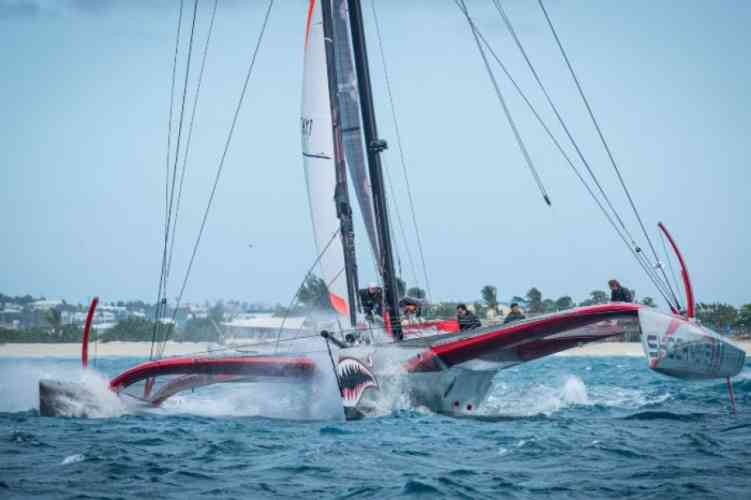 SINT MAARTEN (SIMPSON BAY – By Herb McCormick) – The 63-foot trimaran Shockwave traveled some 4,595 nautical miles after a major refit in San Diego to begin its inaugural season of racing under a new syndicate comprised of owner Serge Durrant, skipper Jeff Mearing, co-skipper Scott Klodowski, navigator Nils Erickson and a crew of fellow, passionate sailors. On Day 2 of the Caribbean Multihull Challenge, they invited the regatta’s official press writer—yours truly—to come along for the ride. And while the day’s eventual outcome for Shockwave was certainly disappointing, the ride was definitely wild. Here’s my report.

Shockwave was previously called Paradox, a name reflective of its dual purpose as a flat-out ocean racer also capable of occasional cruising, with a relatively comfy interior for a trimaran with decent berths, a proper head, an induction stove and even air conditioning. A quick tour before heading out to the racecourse also revealed seriously robust construction. Shockwave was built to go places. Quickly.

As the tradewinds seriously kicked in while the fleet assembled for the 0900 starting sequences to commence, it was readily apparent that conditions were going to be, as they say, sporty. With the breeze registering a solid 30-knots, and then gusting to 32, 35, and eventually 39 knots, the talk aboard Shockwave was about sail configurations, specifically how small a jib to carry and whether to go with two or three reefs in the mainsail. Skipper Mearing ultimately called for a double-reefed main.

The other classes had already started and cleared the area when the countdown for the MOCRA Multihull class—along with Shockwave, it consisted of the MOD 70 trimarans Argo and Maserati—began. But with the wind continuing to build, there was a postponement, then a second one when Maserati radioed to the race committee they had a problem. Principal race officer Marc van Dongen called Argo and Shockwave to see if both boats were okay to postpone, and both readily agreed. As Erickson said, the crew of Argo helped Shockwave in Antigua after the boat had damaged its mainsail track on the long delivery, and it was clear there was a strong sense of camaraderie among the competitors. Yacht racing can be pretty cool.

Once the final countdown began, on Shockwave there was a slight moment of hesitation just before the start, and for the briefest of periods it appeared the big tri might be late. But Mearing pulled the trigger inside of a minute and Shockwave hit the line perfectly, making better than 20 knots on a power reach to the first mark. Argo, bigger and meaner, scorched past to leeward while Maserati, still with seeming problems, lagged behind. Then both leaders rounded the mark and came hard on the breeze for a beat down the southern shores of St. Maarten, the first leg of a long round-the-island race.

And mate, it got wet. And trust me, when the spray comes flying off the amas of a powerful trimaran like Shockwave, it stings. Hugely. It was time to put the camera and notebook away. There wasn’t a dry spot topsides.

All was well until one of the crew spotted the lower section of the mainsail beginning to delaminate (“I see sky”) and Team Shockwave quickly went into action to tuck a third reef in the main and minimize the damage. Once the job was complete, the mainsheet was sheeted on hard, and moments later, the unmistakable sound of cracking carbon could be heard over the wind and waves. Shockwave’s boom was in two pieces. Busted. The racing, and the regatta, was over.

But once back in Simpson Bay, owner Durrant praised the crew, for staying safe, for being efficient, for their excellent seamanship. “I’m actually happy about the day’s result,” he said. Shockwave will be back. No doubt about it.

Elsewhere on the Day 2 racecourses, Argo was again the winner of the Grand Prix trimarans. The Banuls 50 tri, Finn, recorded its third straight victory in CSA Multihull 1 to stay atop the leaderboard. La Novia was the winner in CSA Multihull 3 and the 53-foot cat Quality Time topped the Pirate Class. Skipper Petro Jonker said his yacht, basically a head boat for tourist outings, hit 31 knots at one-point powering to Grand Case, where today’s racing concluded, and the festivities and parties commenced. It was that kind of day.

The Sint Maarten Yacht Club will host the second annual Caribbean Multihull Challenge from February 14-16, 2020. The event is open to all multihull sailors on racing catamarans and trimarans as well as chartered cats and cruising multis. For more information visit www.smyc.com/caribbean-multihull-challenge